Yesterday morning, the Denver Post's Jim Armstrong had this to say about the Rockies' general manager:

(Dan O'Dowd is) going to grab a headline or two...And the names involved might be bigger than you think.

No kidding.  That foreshadowing proved to hit the bullseye, as O'Dowd struck deals with two unexpected yet familiar names last night.  I'll try to sort through the details and aftermath of the deals.

The Rockies agreed to add six 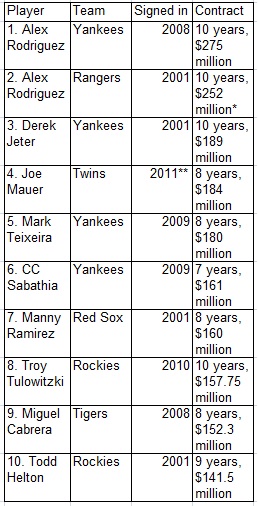 -year extension worth $119million to the final four years of Troy Tulowitzki's current contract, also in essence picking up his option for $15million in 2014.  Overall, the Rockies are committing $157.75million over ten years to the man who finished 5th in the 2010 NL MVP voting.  (Sidenote:  only Alex Rodriguez and Derek Jeter have been offered a contract commitment as long as ten years before).  The deal would make Tulowitzki a Rockie until 2020, when he will be 36.  His current contract stays in place, meaning this deal does not affect the Rockies' payroll until 2015.  That $157.75 left owed to Tulowitzki ranks as one of the largest agreements in Major League Baseball history.

Alex Rodriguez re-negotiated his contract with New York in 2008.  Derek Jeter's deal expired this season, and Manny Ramirez' has been done for a few years.  That means the Rockies will have two of the top seven richest contracts in MLB history on the roster in 2011.  The Rockies will be the only organizition with more than one contract ranking in the top ten other than the Yankees, and Mike Hampton's doesn't lag behind Todd Helton's contract by much.

I think we can officially stop bellyaching about the Monfort Brothers' willingness to spend money.

As if that wasn't enough, Dan O'Dowd came to a surprise agreement with Jorge de la Rosa.  How much of a surprise?  Just twenty minutes before the DLR story broke, Troy Renck posted a story about the Rockies' increased interest in Carl Pavano.  In recent weeks, Colorado was reportedly more and more on the outside of negotiations on the lefty after refusing to spring for a contract past three years.

The two appear to have compromised, with Colorado offering more per year than desired, while de la Rosa forfeited the chance of a guaranteed fourth year elsewhere.

Here is how de la Rosa's contract breaks down:

The Rockies signed themselves up to be on the hook for $32million, but it could end up anywhere between $21.5million and $43million in the end.  If de la Rosa is a worldbeater for two seasons, he has the option to opt out of $10.5mil guaranteed to pursue a fat contract at the age of 31.  If not, the Rockies have him for a third year.  Once he returns, the Rockies can bring him back again in 2014, though that is likely only if he has three great but not spectacular seasons and the futures of Ubaldo Jimenez and Carlos Gonzalez have been settled, one way or another.

Neither deal is official as of yet, with Tulowitzki's extension pending a physical, and the final details to de la Rosa's deal left to iron out, but both are expected to proceed without a hitch.  The flurry of activity left the Rockies' world abuzz last night, so now it is time to quickly examine the short-term and long-term effects of these deals.

Off-topic is here, though how can you go off-topic today?

A ten year commitment is ridiculous.  A lot can happen in ten years, so there is reason to be nervous, as undoubtedly several analytical articles are stating across the blogosphere this morning.  Yahoo's Jeff Passan already knows it will end badly for both the Rockies AND Tulowitzki.  The obvious reminder of the risk is just across the diamond, scooping Tulo's throws from the dirt.  It remains to be seen whether the contract will be worth it, but if you were to construct the perfect player to give a ten year deal to, it would be a young power hitting shortstop with fantastic defense and an unnatural drive to compete.  Moreover, at least one of Troy Tulowitzki, Ubaldo Jimenez and Carlos Gonzalez would be extended past 2014 anyway, and Tulowitzki was the easy choice of the three.  The Rockies wanted him here for years after 2014, and now they do.

Troy's contract has absolutely no bearing on the payroll until 2015.  His current contract will play out as originally planned.  $119million will be spread across six years to conclude the deal, and though the year-by-year breakdown has not been released, he  would likely be approaching $25million in 2019 and 2020.  That's incredibly rich, but unlike Todd Helton, Tulowitzki will be just 35 and 36 in the final two years of his contract.  He could be a perfectly solid third baseman by then.  The front office is clearly banking on a string of extended contention increasing attendance, concessions and merchandise sales, allowing them to raise payroll before Tulowitzki eats a quarter of the payroll.  If the Rockies fail to make the playoffs several times in the next five years, the deal could turn sour in the latter half of the decade.

Here is Rob Neyer's take, essentially that it's not a terrible deal, that Tulowitzki could easily be worth it, but wonders why a deal was struck now.  Considering the four-year veteran was under contract for four more years already, it is a worthy question.

Dan O'Dowd got what he wanted, a three year contract with Jorge de la Rosa so that there is no money owed in 2014, the last year of club control for Ubaldo Jimenez and Carlos Gonzalez.  Year-by-year contract details have not come out yet, but it's fair to assume he will be earning $10-11million per year with the difference made up in signing bonus.  The Rockies are overlapping a year of one blockbuster contract with another (Helton and Tulo), and Dan O'Dowd has done the same here, overlapping the last year of Aaron Cook's contract with Jorge de la Rosa's.  The "feel" of the payroll hit will be no different in 2012 and 2013 than it was the last two seasons.

With the signing of Jorge de la Rosa, we can officially close the book on all rumors involving Gavin Floyd, Carl Pavano, James Shields, Matt Garza, Zack Greinke et al.  The rotation will now have five members who are written into the rotation in pen:  Ubaldo Jimenez, Jorge de la Rosa, Jhoulys Chacin, Jason Hammel and Aaron Cook.  Should de la Rosa remain healthy and pitch up to his potential, that is a playoff-worthy rotation, and a deeper one on than even contending teams.

Again, Tulowitzki's deal does not affect the 2011 payroll in any form.  He will make $5.5million in 2011, just as originally planned out.  However, the de la Rosa contract was a bit richer than expected and certainly more than the Rockies' brass hoped for.  Even if the $21mil budget Jeff estimated is accurate, de la Rosa's contract effectively halves it, and holes remain as pointed out by Thomas Harding:

• Finding a versatile right-handed bat -- a younger, more versatile version of Melvin Mora, who held the job in 2010.

• Establishing a catcher to complement Chris Iannetta, who O'Dowd said will finally have a chance to grasp the starting role.

• Adding a proven reliever to the bullpen -- and it doesn't matter if he's right- or left-handed.

It is still possible that O'Dowd could make a splash and trade for Mike Napoli or Josh Willingham or a similar type, but that would leave almost nothing left to fill other holes.  Adding one of those players would force a cheap player like Mike McKenry or Chris Nelson to play a more critical role than planned.  If that doesn't happen, expect Dan O'Dowd to step back into the refuse pile and bring in a Jorge Cantu/Rod Barajas type duo to fill the first two bullets while trusting Carney Lansford to work magic on Ian Stewart, Seth Smith and Chris Iannetta.  Troy Renck has jumped on the Jesse Crain wagon, but I doubt O'Dowd throw multi-year money at a reliever.

In spite of all the excitement in Rockie world, the Rockies added no one to their 2011 roster than wasn't already on the 3rd place 2010 team.  Granted, the Rockies three months were missed by Tulowitzki and de la Rosa combined, so health alone for the two would improve the team.  I hold out hope O'Dowd is willing to trust two of the cheap  trio of Nelson, McKenry and Cole Garner enough to pursue Willingham or Napoli.  That would, in my view, optimize the Rockies' chances of competing in 2011, yet I expect bargain bin shopping is what O'Dowd will end up doing.

Uribe could cash in as 'second' option - Stats & Info Blog - ESPN  While de la Rosa's contract is a little steep, the Dodgers signed former Rockie Juan Uribe to a 3-year $21mil contract to be their second baseman.  Mark Simon makes a compelling argument why Los Angeles was willing to extend for Uribe, but consider the 31-year-old just got the richest three year contract for a second baseman in nine years.

MLB Trade Rumors: Ian Stewart for Gavin Floyd? - FakeTeams  This is a bit obsolete now, but FakeTeams examines the Gavin Floyd for Ian Stewart rumor.  The poll at the time of writing was a dead heat.

Twitter / Craig Baker: According to the twitter of Craig Baker, a minor league pitcher for the Rockies, the AA Tulsa coaching staff in 2011 will include Duane Espy, Dave Shuler and Dave Hajek.

Tulo: Rockie For Life (With Apologies to Muzia) - Purple Row  I have republished it on the front page, but oo_nrb has come through again and designed a fantastic wallpaper to commemorate Tulowitzki becoming a Rockie for life.

Rockies plan to non-tender Delcarmen | All Things Rockies — The Denver Post  Delcarmen was supposed to be a project, someone for Bob Apodaca to fix back into a setup man again.  But his career in Colorado looks to end after 8.1 innings, as the Rockies will non-tender him Thursday after failing to negotiate a deal to prior to arbitration.  What looked to be a steep price in talented A-ball pitcher Chris Balcom-Miller is certainly now a tough deal to swallow.

The Rockies Curious Moves: de la Rosa and Tulowitzki  JC Bradbury thinks that de la Rosa's deal is a bad one, though that is banking on past value continuing.  The Rockies clearly believe he will fulfill the #2 potential.  It is no secret that if he does not, such a deal will not look so fine in 2013.  His take on Tulo's deal is extremely interesting.  He is clearly conflicted, bouncing between horrified and very intrigued.