So Mr. Remington at Fangraphs took a gambit at analyzing the twenty-five nine figure baseball contracts and lumped Todd Helton's current contract into the "unmitigated disaster" category (here). Some of us RowBots pointed out his conclusions lacked evidence. I provide evidence below that his conclusion about Helton's contract is dead wrong. 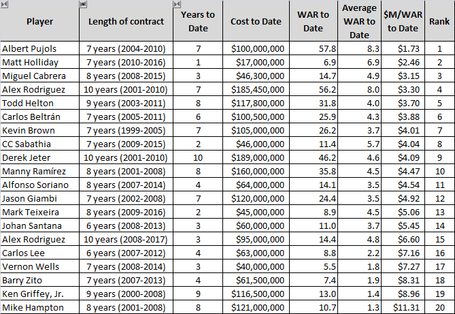 I analyzed the same contracts he mentions, but filtered out those that have not started yet, yielding twenty contracts for which we have at least one year of performance to measure. I captured the money spent to date on those contracts (to the extent possible) according to Cots Contracts. I captured the WAR provided by each contract to date according to Fangraphs. I performed division on those two values to derive the cost per WAR for each contract. SURPRISE! Mr. Helton's contract was #5 in terms of the cost of WAR over the term of that contract to date. As en vogue today, you are entitled to your own opinion, but not your own facts.