He is just nineteen years old and has pitched in the Colorado Rockies' minor league system less than one full season.  Despite learning to use his change-up more in 2010, this young starting pitcher has already won accolades from Baseball America and is a known name among talent evaluators.  I could be talking about 2009 first round pick Tyler Matzek, who owns the highest signing bonus in franchise history.  But I'm referring to Albert Campos, who is relatively unknown among Rockies fans, though he shouldn't be for long.

The Rockies have somehow quietly developed a dominant Latin American prospect pipeline for pitchers.   The big league rotation in 2011 will be 60% filled directly by the program, with Ubaldo Jimenez coming from the Domincan Republic, Jhoulys Chacin from Venezuela and Jason Hammel arriving in a trade for Dominican prospect Aneury Rodriguez.  Campos, a Venezuelan, is a prime candidate to lead the next wave into Coors Field.

The Rockies signed Campos in July 2007, netting one of the organization's top international targets of the year.  Unfortunately, they missed out on their other top target, Rangers prospect Martin Perez, who was actually six slots higher than Tyler Matzek in Baseball America's top 100 prospects this spring.  Perez demanded a pretty penny, and the Rockies nabbed Campos with a better bargain ($165k, approximately half of the bonus the Rockies gave to Francisco Sosa and one third that of Christhian Adames).

The Pioneer League hosts not only some of the most offensive ballparks in the country, but numerous teams (notably the Los Angeles Dodgers) actually place their short-season A-ball teams in the Pioneer League.  Campos achieved those statistics against older, more experienced hitters in unkind ballparks.

After dominating the league at a relatively young age, Baseball America ranked Campos as the second best Pioneer League prospect at the end of September.  I got an opportunity to travel to Casper in September and made sure I caught Campos' final start of the season.  Coming into the game, he had a 20-inning scoreless streak, so I was excited.  I will share more pictures, video and a full scouting report after the jump.

And no, that isn't old footage of Ubaldo Jimenez.

Prior to 2010, Campos was predominantly a two-pitch pitcher, utilizing a fastball that sat mostly from 90-91 and a curveball, which Baseball America calls a "late-breaking, high-70's...strikeout pitch."  At the game I attended, the description did not seem to fit.  Perhaps it was the odd angle of my seat, perhaps it was an off-night, but his curve appeared slow, flat and elevated from my view:

That wasn't the only thing that did not seem to fit my expectations.  Campos appeared to be throwing harder than 91mph consistently, though there was not a radar gun or scout in the house.  As the season wore on, Campos started using an ever-improving change-up, according to Jack Etkin.

As it stands now, Campos has an average fastball, a good curveball and a developing change-up.  It is nothing to get overly excited about, as none of those pitches can carry him through the minors by itself.  Naturally, it is important to remember he is far from a finished product.  While his size could perhaps indicate his room for growth and increased strength is diminished, those close to him believe the opposite:

"We pitched him deep sometimes into the seventh, eighth inning and he'd pull out 94s and 93s in that last inning just to finish people off when he was ahead in the count. There's more in the tank. His full potential with that arm strength's not there yet." - Casper Ghosts pitching coach Craig Bjornson, via Jack Etkin.

At just 19, Campos' body screams major league pitcher.  One would expect durability, especially given his very fluid pitching motion.  If Bjornson is correct, Campos could theoretically develop into a low-mid-90's pitcher.  If the curveball is as good as scouting reports suggest and the change-up continues to develop, his potential path to the big leagues is as paved as any 19-year-old rookie league Latin prospect.

It is awfully tempting to want to draw comparisons to Ubaldo Jimenez, who had far less success in his first year in Casper (6.53 ERA at age 18).  It isn't just Campos' size, socks and performance on the mound:  his no-nonsense quietly competitive demeanor would make him a very easy pitcher to root for.  Again, Bjornson provides insight via Etkin:

Rookie-level Casper pitching coach Craig Bjornson said some of his starters were a bit gun-shy about making consecutive starts against the same team, wondering how their stuff would play so soon against the same lineup.

Such concerns didn't faze Venezuelan righthander Albert Campos, who told Bjornson, "I want the best team every time in a row."

The man just wants the ball. And when he gets it, he throws it.  Six of eleven would-be base-stealers were cut down with Campos on the mound, in part due to a quick pitching motion that has been measured as low as 1.25 seconds to the plate.  He was quick all around, as I measured him at just about nine seconds in between pitches:

"He was very mature for his age," Helena manager Joe Ayrault said, "and had a great idea how to pitch."

The mental side part of a pitcher's game is pretty important when working up from rookie ball.  It's good to see Campos is in a good place.

There really is not anything to dislike about Campos' game given his age and level, making the two biggest knocks against him....his age, and his level.  Campos is still a long ways from being an MLB-caliber starter, still requiring multiple strides in stamina, consistency and pitch effectiveness.  While another Venezuelan has set a precedent for taking three years from Casper to Coors, Jhoulys Chacin is an exception. 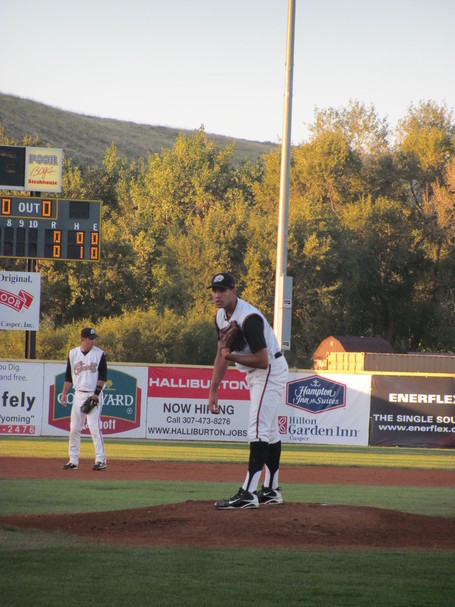 Campos still has some growing to do, not necessarily in terms of bulk, but rather in arm strength and repetition.  It is difficult to know what might develop from that.

On the day I saw Campos, he was effective but quite different than scouting reports have suggested.  As mentioned before, his fastball seemed to have more heat than advertised, his curve was high and flat, and while his control was generally good, his command was more off than on.  Idaho Falls(one of the worst teams in the league) barreled pitch after pitch that was left up in the strike zone, drawing four runs on three well-struck doubles and three sharp singles around several line drive outs.  He battled through to finish six innings, but for a while, a hook seemed immenent in the second inning.

One start is obviously too small of a sample size to extract meaningful conclusions on consistency, but if he has similar issues with command, he doesn't have enough movement or velocity (yet) to overcome them.  Developing one of his three pitches into a swing and miss pitch at higher levels would go a long way for his career.

With such a long trek ahead of him, there is no telling what Albert Campos can develop into.  As of now, one could reasonably see a #3 starter blossoming out of the Venezuelan, though the realm of possibilities is still vast.  Rockies fans should feel good about putting him around 20th in the latest PuRPs ratings.

Campos will likely join a stacked Asheville Tourists roster in Low-A to start the 2011 season, a roster which should include PuRPs Kyle Parker, Peter Tago, Corey Dickerson, Rafael Ortega, Will Swanner and some combination of Christhian Adames, Russel Wilson and Josh Rutledge.