Last year there were a lot of self-proclaimed nerds and geeks in the game threads and discussions often went off-topic.  Once a discussion I was part of even went to helping a younger Rowbot with his/her physics homework!  Well, this post may only interest the geekiest of the bunch, but during one game last year I promised to check into the effect of a phenomenon called the "drag crisis" or "drag bucket"on balls hit at Coors field, and how it affects the trajectory of a fly ball.  The original hypothesis was that this drag crisis or bucket would decrease the Reynolds number of the flow such that drag COEFFICIENT would actually be higher on the ball at Coors than at ballparks at "normal" (closer to sea-level) altitudes, canceling the change in air density on drag. I remembered this recently while reading about baseball aerodynamics for a class I am taking.  I had to do a project on flow stability and since my research deals with spinning bodies I decided to discuss stability of flow over spinning cones, football-shapes, cylinders, and spheres.  Most of this reading and work I did with baseball aerodynamics had to do with the instability of flow over knuckleballs.  If I get enough interest shown in the comments section, I will make a post later in spring training discussing these instabilities, but if you want to know more about it you can always read references [1-3].

If I haven't scared you away yet, join after the jump to really get your nerd on.

Now I realize many readers are probably asking "what the heck is Reynold's number?" or "Drag Crisis? Sounds like someone from the Rocky Horror Picture Show is having a wardrobe malfunction!"  The drag crisis, as explained by our good friend Wikipedia [4], is "a phenomenon in which drag coefficient drops off drastically as Reynolds number increases."  Reynolds number is defined as U*rho*D/mu, where U is flow velocity (speed of the baseball), rho is the air density, D is a characteristic length (in this case the diameter of the ball), and mu is the viscosity, or the resistance of the air to deformation.  The viscosity term in Reynolds number will remain fairly constant despite the changes in altitude. So as baseball flight speed or the density of the air increase, there is normally an increase in drag.  However, at a certain range of speeds the drag drops drastically.  The cause for this relates to a change from laminar to turbulent boundary layers and is an extensive topic I don't really want to get into here.  This range of this speed changes for different shaped balls and is the reason for the dimples on a golf ball.  Amongst other things, the dimples are designed to cause the ball to enter this drag crisis at the speeds a ball is normally flying during a drive.

A lot of work has been done and many articles written about home runs at Coors Field and how much further the ball carries due to the low density of air, including an article by Alan M. Nathan [5].  In his article he comes to the conclusion that balls travel ~5% further at Coors than other fields due to the density of air dropping to roughly 82% of that seen at sea level.  He correctly accounts for the reduction in Magnus effect (lift caused by spinning of the ball, the same effect that causes curveballs to curve, etc.) when arriving at this number, but neglects any aerodynamic drag crisis.  I have not seen anyone else discuss it yet either, at least not in relation to decreasing the distance a ball travels at Coors, so if someone does see a paper on it let me know. I think his sample size is way too small in his figure he points to (6 weeks of games, covering about 11-14 at Coors) to really believe his conclusion.  One or two games played in outlier conditions would affect his results way too much (1 game is ~7-10% of his data sample!).

Baseballs typically fly within this drag bucket, as shown on Fig. 1, which I got from reference [1].  At Coors, the velocity needs to be 1.22 times greater to achieve the same Reynolds number as a sea-level ballpark because of the decrease in density.  The average home run velocity is 103.6 mph, according to hittrackeronline.com.   This value is represented by the red circle right at the bottom of the drag "bucket" seen in Fig. 1.  At Coors, the Reynolds number is closer to the point I have marked with the purple star for a velocity of 103.6 mph.  The drag coefficient is roughly 30% higher at this point!  Furthermore, as the ball flies, its velocity decreases due to drag, causing the drag coefficient to rise higher out of the "bucket" and creating a vicious (or should I say viscous?) cycle! The drag COEFFICIENT (which, like density, is linearly proportional to drag force) experienced by a ball hit at Coors field, according to the data in Fig. 1, will be significantly higher over the course of a flight than one hit at sea level.  Drag is reduced significantly by the density drop at altitude, and I am slightly skeptical of the accuracy of Fig. 1, but this data says to me that the ball may not carry nearly as much due to changes in drag at Coors Field as most people believe.  In fact, the total drag force acting on a ball may be HIGHER at altitude, despite the lower density!  The real issue behind Coors being "a hitters paradise" is likely field size (as we all have known for years now) as well as pitch movement.  Batters can put a higher initial velocity on the ball (hit it harder and/or more directly) because of lack of pitch movement due to the decreased Magnus effect at high altitudes and lower densities for the Reynolds numbers of pitched baseballs.  Straight pitches are easier to hit hard. 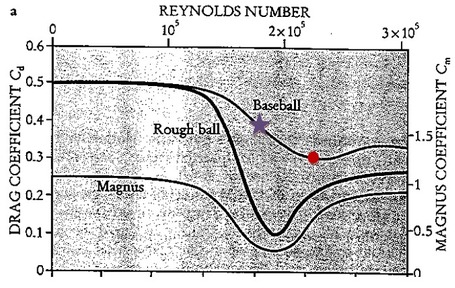 Finally, I should note that further investigation is necessary to come up with a conclusion on the effect of altitude on ball trajectories, because at Coors the Magnus effect will be stronger at the end of a flight than it would be for a ball hit at sea level.  This may account for the feeling that the ball "carries much further" at altitude.  The backspin of a ball hit hard will cause a lifting effect, which may actually be greater at altitude due to the Reynolds number during the flight regime of the ball. In the end, this Magnus effect and not drag may be the real cause of any "carrying" effects seen on balls at Coors, if they do indeed exist at all.

Note that I am not claiming Coors is a pitcher's park or anything like that, just investigating the flight of baseballs and attempting to dispel myths about baseball played there.  It is fairly common to read comments (on other sites of course) along the lines of, "LOLCOORZ is not a real stadium because the thin air makes balls go faster and far BOOM!"  Hopefully this helps to prove these people stupid, ignorant and (best of all) wrong.

If I have free time I will make a flight dynamics code to simulate trajectories of baseballs at altitude and sea level and see how much these two effects (drag-bucket and Magnus effect) change the flight path of the baseball at altitude compared to sea level.   I will post these results if I ever get around to doing it, but don't hold your breath!