It didn't help that Jorge de la Rosa was inconsistent on the mound, to put it mildly, and that the Rockies defense continued a 2010 theme of humiliating themselves in public. It also didn't help that the Rockies lineup today featured four or five players that aren't the regular starters at their position, but once you get past that, a lot of credit should be given to a standout pitching performance by the Rockies opponent this afternoon, as Mike Pelfrey went seven innings, giving up just five singles and no walks, while striking out six.

De La Rosa's day got off to a rough start early, as he allowed a single up the middle to Luis Castillo with one out in the top of the first, walked David Wright, and then saw Castillo score on another single up the middle from Jason Bay. The rest of his afternoon seemed a constant struggle to keep Mets off the basepaths and from coming around once they got on, as he finished allowing five runs to score, four earned, allowing eight hits and walking five in six innings of work.

Defense was an issue, as a botched rundown and error on third baseman Ian Stewart led directly to one run scoring, and a wild pitch that could possibly have been blocked by catcher Miguel Olivo led to another.

In short, this game in retrospect seems like a very difficult beast to win, but let's hope that the Rockies can take away some lessons from the problems on display in the loss. Defense is the huge elephant that needs addressed very shortly. For the hitters, their approach in fat pitch counts (2-0, 3-1) seems overly aggressive, and I think opposing batteries are taking advantage of that knowledge.

Troy Tulowitzki had a pair of infield hits, that's about as high as the highlights got (Brad Hawpe was actually the day's offensive WPA leader for his eighth inning pinch walk, Esmil Rogers led the way overall).

The other stuff after the jump. 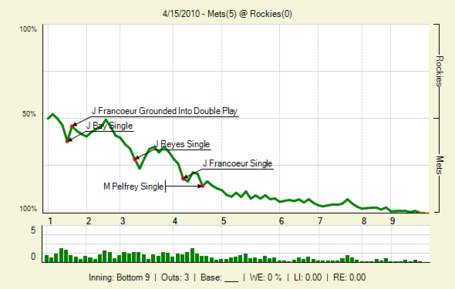