Share All sharing options for: Rockies 4, Braves 0: No-No for Ubaldo!

Ubaldo Jimenez is obviously a member of a superior alien race come to dominate the baseball galaxy. I for one welcome our new overlords.

Jimenez shut down the Atlanta Braves on a windy Saturday night, striking out seven and walking six (all in the first five innings). And oh yeah, no hits allowed. Only the first time that's happened in Rockies history (or by a pitcher with a name starting with U). No big deal or anything. Jimenez went to the stretch for all hitters after the fifth inning and retired every hitter he faced thereafter, throwing a career high 128 pitches in all. And he was throwing 98 on those last few pitches. Ubaldo may be a freak of nature, but he's our freak of nature.

It's not like the Braves are slouches either--it's a tough lineup up and down, and Jimenez was THE MAN. I can't emphasize that point enough.

Jimenez was assisted not only by the strong wind blowing in at Turner Field but also by a phenomenal play by CF Dexter Fowler, who made a diving catch in left-center on a Troy Glaus line-drive in the seventh. What's that UZR? Dexter Fowler is a horrible fielder? Not tonight. Tonight was simply magical, one of the best moments I've ever experienced in my time as a baseball fan.

Here's the list of no-hitters in NL history. Only the Mets and the Padres don't have a pitcher on that list.

Jimenez also knocked in a run to help his cause during the Rockies' three run fourth. Carlos Gonzalez returned to the lineup after a four game hiatus and provided two hits and two RBI, while Brad Hawpe also added three hits, but all the support Jimenez needed came on a first inning sacrifice fly by Troy Tulowitzki, driving in Gonzalez. But let's be honest, the offense was a mere footnote to the beast on the hill.

More after the jump. 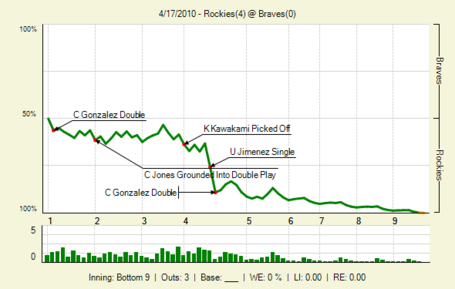 We Bow Before the Greatness of: Ubaldo Jimenez (.320 WPA pitching, .095 WPA hitting)