Keli McGregor, 17 year member of the Colorado Rockies organization was found dead in his hotel room in Salt Lake City, Utah. He was 48.

SLC Detectives are reporting that nothing seemed suspicious. The Salt Lake City Medical Examiner's office will determine a cause of death. Initial investigation suggests natural causes. SLCPD Detective Rick Wall said two of McGregor's associates couldn't get in touch with him and that someone entered his room at The Grand America Hotel in downtown Salt Lake City and found McGregor unconscious. Wall said it was unclear who discovered him.

According to the team, McGregor was in Salt Lake on a Rockies-related business trip with CEO Charlie Monfort and executive vice president Greg Feasel.

Keli was a very important part of the Rockies organization during his tenure, and was most assuredly part of where the team is today.

Keli played football for CSU, was drafted by the Broncos, and also played with Indianapolis and Seattle.

Our thoughts and prayers go out to the McGregor family.

More details as made available. 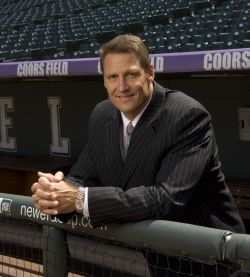