Earlier in the day, Seth Smith was informed he would be starting on a more regular basis with Brad Hawpe being pushed to the disabled list.  After an uneven start to the season, consider Smith's fire lit.

"Mr. Late Night" started early today, hitting a solo home run to right field on the second pitch he saw.  His day was not done, as he yanked a hanging changeup down the line for a three-run home run for a four run lead.  That home run incomprehensibly gave Smith the team lead in RBI and home runs.  Miguel Olivo stole the team lead for home runs back the following inning as he blasted a no-doubter to left off of reliever Blake Badenhop.

Chris Volstad (L, 1-2, 5.79) elevated pitches all day long, and the Rockies consistently made him pay for it.  Volstad departed with one out in the fifth and was charged for seven runs on seven hits.  Dexter Fowler continued his surge back into respectability with a triple and single (both batting left-handed), and Clint Barmes walked twice.

Jorge de la Rosa (W, 3-1, 3.91) struggled with his location, but he still pitched the requisite five innings for his second win of the season.  He was removed after a suffering a bone bruise, but the Marlins managed two runs off of de la Rosa on just four hits. 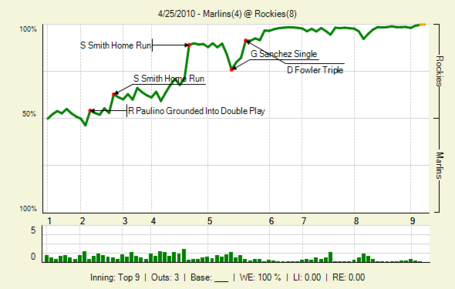