I guess we're supposed to believe the shadow government's claim that the Giants defeated the Rockies 6-1 today behind a one hit pitching performance by Matt Cain (1-1). After all, nobody could see the game that didn't go to the stadium. I figure that the Rockies were confused about whether the game actually counted in the standings from their performance today.

Only a Troy Tulowitzki double off Cain in the fourth saved the Rockies from a serious no-hit bid by Cain. The Giants' hurler went eight innings and struck out eight, while rookie Esmil Rogers (0-1) had a rough first start, allowing five runs (four earned) on five hits. Most of the damage was off the bat of former Rockie Juan Uribe, who hit a three-run homer in the second. Yuck.

On the positive side, Todd Helton knocked in a run in the ninth on a two-out single. Yeah, that's about it.

There's nothing to do but forget about this one ASAP and move on, hoping to win with Jhoulys Chacin tomorrow.

Graph, etc. after the jump.

Pretty much a flatline here: 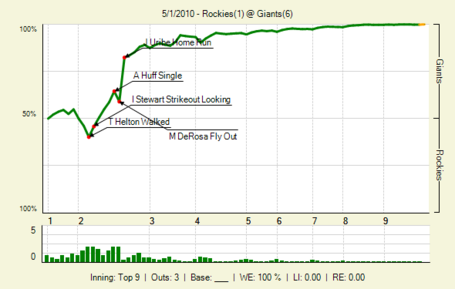