Wow! Miguel Olivo got things done today. He capped a great afternoon with a walkoff home run in the bottom of the tenth to beat the Phillies. The home run completed his 5-for-5 afternoon, which included three singles and a double. The home run was the first of the walkoff variety for him.

Brad Hawpe also showed up today, driving in three runs. The first RBI came on a sac fly and the other two scored on what eventually was scored as a triple. Originally Jayson Werth had trouble fielding the ball and Hawpe doubled and advanced to third on the throw, but the scorer eventually changed it to a triple.

Aaron Cook turned in a quality start allowing three runs on eight hits and two walks. The bullpen turned in a solid effort as the Phillies offense couldn't score off them. Matt Belisle contributed solidly with 1 1/3 innings pitched, striking out three. Joe Beimel also threw 1 1/3 innings to pick up the win. 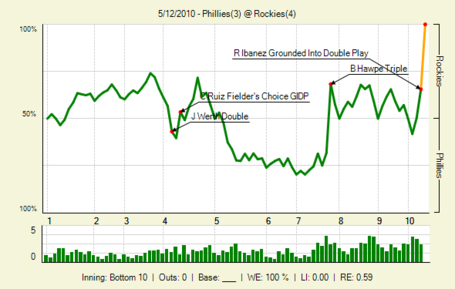