Rockies walloped by Ryan Zimmerman and Nationals in the slop, lose 14-6

Share All sharing options for: Rockies walloped by Ryan Zimmerman and Nationals in the slop, lose 14-6

While he had been brilliant in his first two starts of the season for the Rockies, Jhoulys Chacin allowed a few too many mistakes before Ryan Zimmerman batted and then twice allowed big mistakes while Zimmerman was batting to put the Rockies in a hole early. Zimmerman finished with two home runs off of Chacin, six RBI and three runs scored as he proved a one man wrecking crew.

Hopes raised by a four run comeback by the Rockies in the bottom of that fifth inning (keyed mostly by a two run Miguel Olivo home run) were quickly dashed, as the Nationals went on to score eight more runs on a Rockies bullpen that competed with the clouds over Coors Field in terms of the deluge they displayed to the fans (what few there were left in the cold) with a seven run eighth.

For the Rockies, Olivo, Troy Tulowitzki and Ian Stewart each finished with two hits, while the top third of the lineup went a combined 1 for 13. 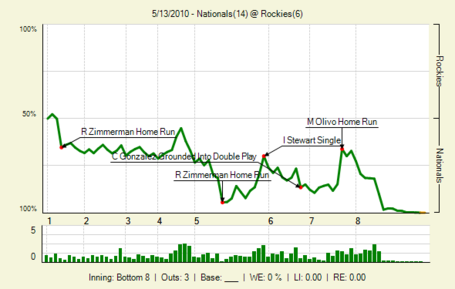