What a breath of fresh air.  Rockies fans arguably have not seen Jeff Francis pitch this well since the 2007 NLCS.

Nyjer Morgan led off the game with a ground ball single up the middle, followed by an Ian Desmond double on batting practice fastball down the middle.  Despite looking shaky to start, Francis dominated from thereon out.  Cristian Guzman hit a sacrifice fly to give Washington the early lead, but considering the situation, that was a good outcome (it was actually a negative WPA play).

Francis stayed at 87-89 with his fastball all day, exhibiting control of all three pitches for most of the game, consistently working ahead in the count.  The Canadian struck out six (including Morgan three times) and walked two, allowing one run on seven hits in seven innings.  That doesn't even do Francis justice.  Three base knocks were infield hits and three others were seeing eye ground balls through the infield.  He had a 9-5 GB/FB ratio, but considering six hits came on ground balls and at least three "flyballs" were popouts, it's safe to say the southpaw was on.

The Nationals were 0-for-8 with runners in scoring positon, and the Rockies weren't any better at 0-for-5.  Instead of getting the big hit, the Rockies settled for the moderate fly.  Troy Tulowitzki doubled, moved to third on a groundball and scored on a sac fly from Miguel Olivo.  In the eighth against Tyler Clippard (L, 7-2, 2.05), Seth Smith walked, Carlos Gonzalez singled and Dexter Fowler pinch-bunted to set the stage for a Brad Hawpe sac fly, an impressive inside-out muscle job to left field.

Matt Belisle (W, 1-0, 2.28) pitched a scoreless eighth inning for the win and Manuel Corpas recorded his second 1-2-3 inning for a save in the last 24 hours. 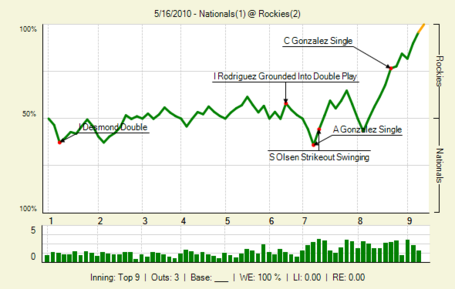