Did you hear about tonight's game? The Rockies had eight hits, but then they also left eight on base. No one on the offense could get a hit when it was most needed. To tie the game at two, Miguel Olivo walked with the bases loaded. Let that sink in. Ian Stewart couldn't get a hit if his life depended on it tonight, going 0-for-5 with 2 K (-0.473 WPA). Clint Barmes went 0-for-4 to put up a -0.219 WPA, and Troy Tulowitzki put up a -0.189 WPA.

Aaron Cook turned in a good start and got rewarded with the no-decision. He allowed two runs in seven innings. Joe Beimel made a single pitch in the eighth and it turned into a Kosuke Fukodome hit, but Rafael Betancourt came in and finished the inning. Matt Belisle pitched the rest of the game and gave up the game-winning homer to Aramis Ramirez. 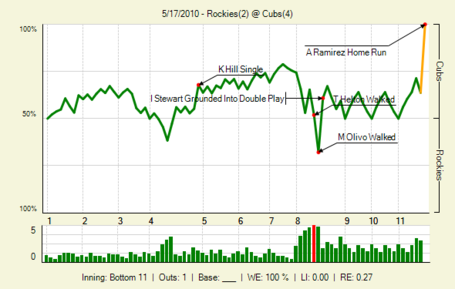