The Rockies' recent struggles at Wrigley Field didn't come to an end tonight, as they suffered another tough loss and as a result, were swept for the first time in 2010. With the loss, Colorado has now lost 10 of their last 11 games at Wrigley and are now back under the .500 mark.

Other than Todd Helton and Carlos Gonzalez (who extended his hitting streak to 12 games), the Rockies really struggled offensively tonight. With that being said, they still did enough to give themselves some scoring chances, but with the exception of Helton's first homer of the year, and first in 130 at-bats (a two-run shot off of Carlos Silva in the seventh inning), they were largely unable to convert for the second straight night.

Jhoulys Chacin didn't have great command tonight, but he did enough to keep his team in the game. He struggled in the first inning, but was able to retire seven straight before running into some more trouble in the fourth. When it was all said and done, The Machine allowed three runs on five hits and five walks in 5.2 innings. He struck out six. Randy Flores came on in relief of Chacin and picked up a key strikeout of Kosuke Fukudome. That allowed the Rockies to get within striking distance on the aforementioned Helton HR, but squandered a chance to do anything beyond that later in the inning after Miguel Olivo walked and stole second (and subsequently injured himself - more on that later). Ian K. Stewart struck again (one of three Ks in the game), Clint Barmes just missed a pitch up in the zone and flied out to left, and Ryan Spilborghs struck out in pinch hit opportunity.

Olivo left the game in the top of the seventh after smacking his face on the ground during an awkward slide into second while stealing. No word as of yet on how long he'll be out, if at all.

Win probability graph, Rowcall, and tomorrow's starters after the jump. 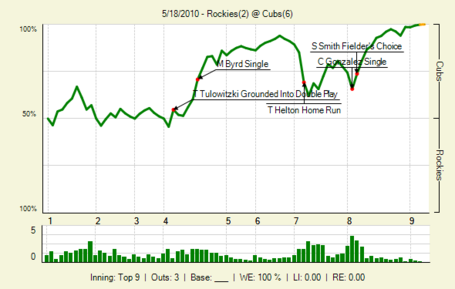