Where are you? We thought you were going to do well this year, but you just don't show up when we need it. Before tonight, you averaged two runs over the last three games. And then you faced Felipe Paulino tonight who likes to throw a lot of pitches (he walked five of you!) and managed to get two runs off of him on two hits. This was over six innings! Then you guys get to face Brandon Lyon and actually place two hits in his stat line to have runners on first and second. That was followed up with . . .  nothing.

Oh, and the defense? Well, Clint Barmes that flub in the eighth eventually broke the tie. To make it worse, Cory Sullivan gave the 'Stros the go-ahead run. Less said about Jeff Keppinger's bases-loaded double to clear the diamond, the better. Though it should be said that Esmil Rogers, who pitched during all of this, didn't make a bad pitch to give up that double.

Hey, guys, it's Ubaldo Day tomorrow. Please give him some run support, even if you are going up against Roy Oswalt. 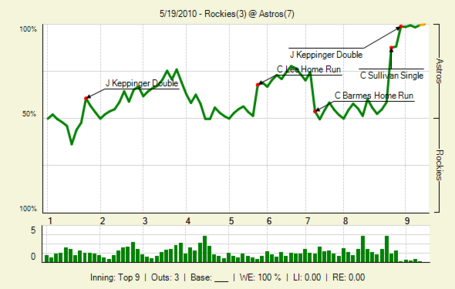