So in the Game Thread story, I mentioned that the best game ever by a pitcher named Chacin was by a man named Gustavo for Toronto.  Then I wrote this:

I'm going to go out on a whim and suggest Jhoulys will beat that at some point in his career, so what better day than today?

Unfortunately, Jhoulys Chacin did not beat it, be he did match it.  The 22-year old rookie had the Giants off-balance all day long, striking out seven while allowing just one hit in seven innings of dominating work.  Throw in three walks, and that's a Game Score of 79, exactly the same as Gustavo's effort for Toronto.  I'll take that any day of the week, especially considering that's the third best Game Score by a Rockie this season, behind Ubaldo's no-no and Jorge de la Rosa's effort in the Home Opener.

Offensively, Jonathan Sanchez gifted the Rockies all the runs they needed.  In the fourth inning, Sanchez drilled Jason Giambi in the ribs with a 92 mph fastball.  With Melvin Mora at the plate, Giambi surprised everyone by stealing second base.  Perhaps shaken by the massive shift in Earth's rotation by the event, Sanchez proceeded to walk the next three batters.

With his eustacian tubes still malfunctioning, Sanchez walked Carlos Gonzalez  on four fastballs with two outs in the fifth.  After allowing a single up the middle to Troy Tulowitzki, Bruce Bochy brought in Brandon Medders, who retired zero of the four men he faced.  A Giambi walk and singles from Mora, Ryan Spilborghs and Paul Phillips gave the Rockies a 4-0 lead they would not reliquish. 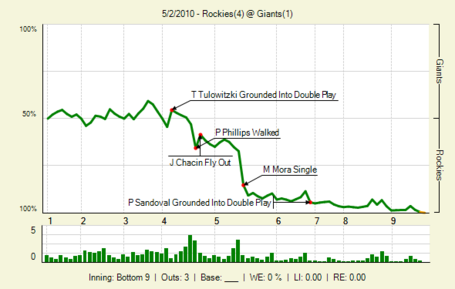 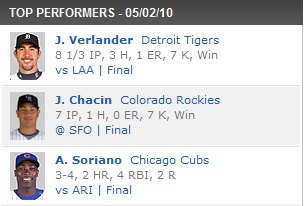