Dominant pitching from Ubaldo Jimenez and a reinvigorated heart of the Rockies lineup helped the team break a three game slide and led them to a four to nothing win over the Houston Astros tonight. Jimenez pitched seven scoreless innings, allowing just one contoversial single to Houston catcher Humberto Quintero while lowering his ERA to 0.99 and earning his MLB leading eighth win of the season. Quintero's single probably could have been ruled an error on third baseman Ian Stewart, which could have in turn put Jimenez in position to go for his second no-hitter of the 2010 season.

Todd Helton, Troy Tulowitzki and Brad Hawpe each supplied two hits, with Tulowitzki's three run blast in the first inning proving the decisive blow against Astros pitcher Roy Oswalt. The Rockies added one more run in the eighth inning when Hawpe singled home Helton, and held on with scoreless innings of relief from Matt Belisle and Manny Corpas.

Outside of Tulowitzki's early blast, Oswalt was nearly as effective against the Rockies as Jimenez was against Houston. Oswalt allowed just two more hits in the five and two thirds innings after Tulo's three run shot and finished his six total innings of work with eight strikeouts. The bottom of the Rockies lineup (Miguel Olivo, Stewart, Clint Barmes and the pitcher's slot) was particularly ineffective, with a 0 for 15 night. 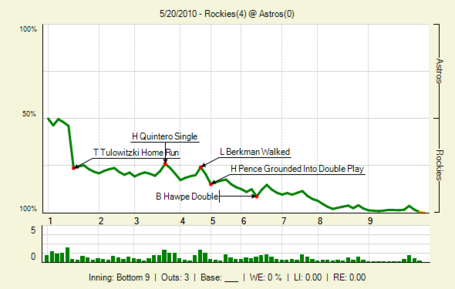