Share All sharing options for: Rockies royally screwed after 9-2 loss to Kansas City.

So the Royals continued their mental mastery of the Rockies, defeating Colorado handily 9-2. The late inning pitching was clearly deficient, starter Jason Hammel melted down in the seventh after six mostly mistake free frames (his two biggest mistakes were the two AB's he didn't plunk Jose Guillen) and his relievers continued that meltdown rather than stopping it as the Royals racked up seven of their runs in the seventh and eighth innings. Esmil Rogers in particular seems to be having a severe rookie slump, and could probably use some time in AAA to sort things out. Some props should go out to Royals pitcher Brian Bannister, who's been a personal favorite since we were both at USC, however, the recurring theme of the Rockies season continues to be our lack of offense, despite a by then meaningless two run home run by Clint Barmes in the eighth, so let's highlight those deficiencies tonight:

What went wrong with the offense:

Phase 1: Before the game started

Phase 2: During the Rockies at bats. 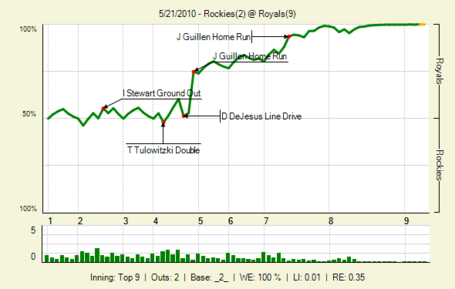