As if to prove to his doubters (myself included) that he was in fact back and in fine form, Jeff Francis threw a gem for a second consecutive game as the Rockies defeated the Royals 3-0. Of course, we knew that the Rockies had to win this game because they were in danger of moving three games away from .500 for the first time this year. With the victory they stay safely within their standard deviation of two games from average.

With the win, the Rockies pulled to 2-4 on the road trip, scoring no more than four runs in any single game.  They will face Zack Greinke in tomorrow afternoon's rubber match.

Francis went 6.1 IP, giving up five hits and striking out three to get his first win since 2008 (1-0). Joe Beimel, Matt Belisle, and Manuel Corpas then combined to throw the rest of the game and preserve the shutout, with Corpas notching his third save of the year.

Offensively, the Rockies' struggles continued, but at least they reversed the pattern, scoring late instead of early. Troy Tulowitzki started Colorado off with an opposite field solo shot (3) in the sixth, while Miguel Olivo and Ian Stewart had RBI hits in the seventh. On this day, thanks to Jeff Francis and Co., three runs was enough for the win. 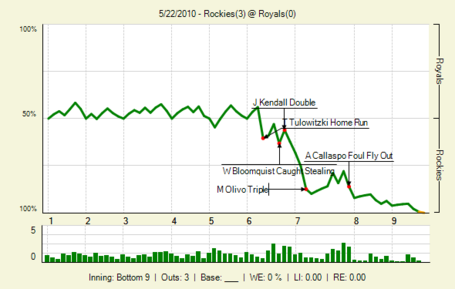