This game can be beautifully unpredicatble.

The Rockies were averaging just 3.7 runs in May coming into today, had scored four or less in all eight games of the road trip and were staring at 2009's AL Cy Young winner.  So the logical outcome?

Colorado battered Zack Greinke (1-5, 3.57) for eight runs, seven earned on nine hits, striking out just once.  Greinke was chased with one out a five-run fourth inning, his shortest outing since July 18, 2008 against the White Sox, a span of 54 starts.  His Game Score of 13 today was his worst since that same day.

Not at all unlike Thursday, the Rockies got an early 3-0 lead against a dominant ace on a 3-run HR from a struggling slugger for his second home run of the season.  Thursday, it was Troy Tulowitzki off Roy Oswalt.  Today, Jason Giambi walloped a fat first-pitch fastball over the plate for the lead Colorado would not relinquish.

A six-hit, five-run fourth (all but one hit off Greinke) gave Aaron Cook an 8-0 lead.  Cookie actually entered the fifth inning up 9-0 but improbably left one out later, failing to qualify for the win.  Control problems led to Jim Tracy giving the early hook for the veteran.  Esmil Rogers gave up two runs in two innings for a humble win, the first of his career.

Clint Barmes had three base knocks (one more than his previous 22 AB combined), Giambi drove in four, Ian Stewart notched three of his own and Troy Tulowizki hit his third home run in his past four games to extend his hitting streak to eight games.  JuneTulo might be showing up a bit early this season.

The win saves the road trip from disaster by ending the trip 3-4, winners of two straight.  Perhaps beating up on a pitcher liek Zack Greinke (even if he was not his usual self) could provide the momentum the team needs. 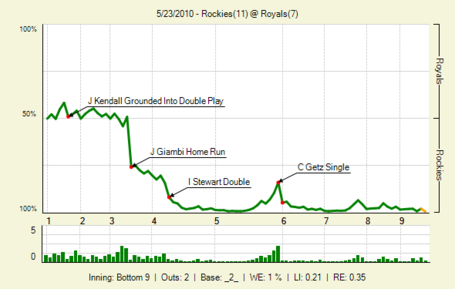