Rockies 3, D-Backs 2: Rox get to Kennedy early, hold on for win

Share All sharing options for: Rockies 3, D-Backs 2: Rox get to Kennedy early, hold on for win

I knew I had a good feeling about Jhoulys Chacin taking the mound today. The 22-year-old rookie kept a capable Diamondbacks offense in check for six innings, allowing just two runs (both coming in his last inning of work) on four hits and striking out five to get his third win of the season.

The Rockies' offense was able to get to Arizona starter Ian Kennedy pretty early in the game, as Brad Hawpe hit a solo homer to lead off the second inning. Then after Miguel Olivo walked and Ian Stewart singled, Kennedy uncorked a wild pitch to Seth Smith which allowed Olivo to score, putting the Rox up 2-0. In the bottom of the third, Troy Tulowitzki hit his fifth home run of the season (and fourth in his last five games) to provide what turned out to be the winning run.

Chacin (3-2, 3.09) cruised through five innings, giving up just two hits and two walks while shutting out the D-Backs. However, Kelly Johnson led off with a single and Conor Jackson followed with a double to plate Johnson and get Arizona on the board. Then, Jackson reached third and scored on consecutive groundouts by Stephen Drew and Justin Upton. Chacin was done letting the D-Backs play catch up at that point, though, as he whiffed Adam LaRoche to end the inning. Matt Belisle, Joe Beimel, and Manuel Corpas (who recorded his fourth save) each tossed a scoreless inning to ensure the Rox held on to their slim lead. 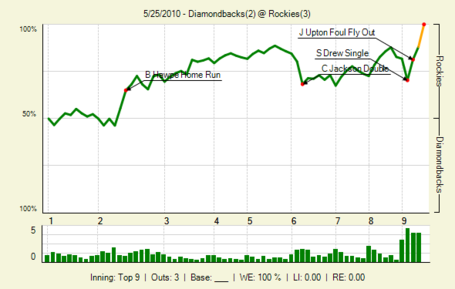