Let us all bow before our king, Ubaldo Jimenez. Entering the game, U-Ball had an ERA of 0.99. He then proceeded to shut down the Diamondbacks on six scattered hits in eight innings. His ERA went down 0.11 points to 0.88. While he only struck out three, he limited his walks to one. U-Ball contributed the most to this win, if you have already figured that out, with a 0.368 WPA. And seeing 98mph on the screen most of the night was darn impressive. Jimenez improved his record to 9-1 this season. Does anyone smell a Cy Young award later in the year?

Oh, let's not forget about the offense. Seth Smith hit two solo home runs (7), Carlos Gonzalez also had a solo shot (5) in his first game back in the starting lineup, and Brad Hawpe hit a two-run triple in the third to everyone's excitement. Even Ian Stewart and Miguel Olivo got into the act of scoring, the former with a two-run single in the seventh. Todd Helton and Troy Tulowitzki also showed some great defense. The former with a nice grab up the first base line, and the latter with a nice throw to demonstrate his range.

What's that you say? Yep, you're right. It's also a four-game winning streak for the Rockies.

I think we also discussed hot blonds, airports, and hot dogs for large portions of the game. 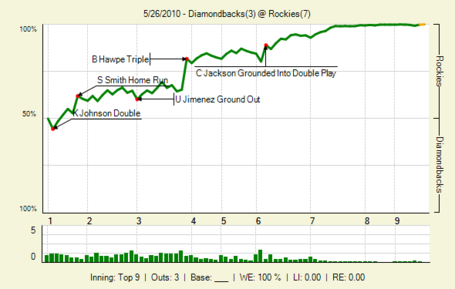