The Rockies completed their first sweep of the 2010 in grand fashion, collecting four home runs off of Arizona's Dan Haren, defeating the Diamondbacks 8-2 on Thursday afternoon. Troy Tulowitzki hit a two run home run in the bottom of the first as the Rockies jumped out to an early three to nothing lead, and pinch hitter Seth Smith, Carlos Gonzalez and Ryan Spilborghs hit back to back to back home runs in a game deciding seventh inning.

It was the first time the Rockies hit back to back to back home runs since Jeromy Burnitz, Charles Johnson and Matt Holliday did it in 2004. Spilborghs and Gonzalez finished with three hits apiece, Tulowitzki with two to drive the Rockies offense. It was Smith's third home run in two games, and Tulo has five in his last seven games after some pundits were questioning his and the team's absence of power just a week ago.

Rockies starter Jason Hammel picked up his second win of the season, pitching five and a third innings, allowing two runs while striking out eight. Both runs and really the only significant scoring threat against Hammel came in a shaky sixth inning, when he left with the bases loaded, two runs already in and one out, but relievers Matt Daley and Randy Flores put out that flame, and four more members of the Rockies bullpen kept the Diamondbacks bats silent for the final three innings.

The Rockies, winning their fifth straight, picked up a game on the Dodgers who lost to the Cubs this afternoon. A series win against Los Angeles at Coors this weekend would mean the Rockies will be in at least a tie for second place in the division. 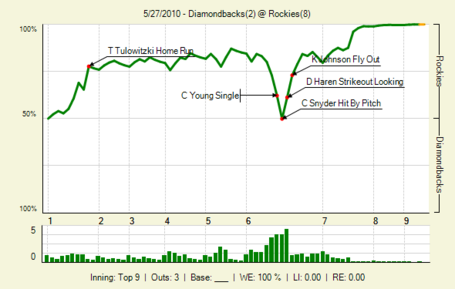