Share All sharing options for: Four in the sixth seals Francis' fate, Rockies lose to Dodgers five to four

So our nemesis clearly remains the same this season, as the Rockies continue to be spooked into submission by Los Angeles. They seemed to give it a valiant go tonight, getting out to an early four to nothing lead in support of Jeff Francis, but after a Matt Kemp solo home run in the fifth inning, Francis really fell apart in a four run fourth, lowlighted by a two run Manny Ramirez shot, and the Rockies succumbed to the Dodgers five to four. Late game scoring issues that have plagued the Rockies all season returned, as the Rockies went one for sixteen from the fifth inning on

The Rockies scored two runs in the first inning thanks mostly to singles by Carlos Gonzalez and Miguel Olivo and a Ronnie Belliard error, and two more in the fourth, as Olivo tripled and scored on an Ian Stewart sacrifice fly, and Clint Barmes hit a home run. The homer by Barmes was reviewed as a fan reached over the outfield railing to catch it before it had completely left the field of play, but the umpires let it stand.

The heart of the lineup shoulders much of the responsibility for this loss, as Todd Helton, Troy Tulowitzki and Brad Hawpe went a combined 0 for 11.

The Rockies did put together two out rallies in both the seventh and ninth innings, getting a pair of runners aboard in each, but could not make anything more of it. With the loss the Rockies fall to two games behind Los Angeles in the NL West, and could drop to fourth in the division pending the outcome of the Giants/Diamondbacks game. 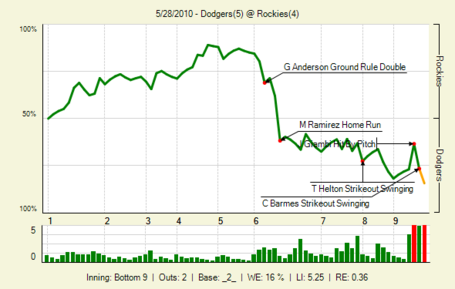