One cannot break out of a spell lightly.  It takes throttling the holy bejesus out of them, shaking them violently until they wake up and outright slug the one hypnotizing them in the jaw, knocking them unconscious, thereby ridding themselves of said curse forever.  I'd like to think that happened tonight at Coors Field.

And what better day to make it happen?  On the year anniversary that Jim Tracy replaced Clint Hurdle, the Rockies won for the 100th time (in 164 tries) with Tracy at the helm, against his former team no less.After losing 20 of their last 26 against the Dodgers, the Rockies finally beat up on Los Angeles, scoring in four of the first five innings on the way to an 8-0 lead against Hiroki Kuroda and Scott Elbert.

Kuroda failed to get his first career win in five career starts against the Rockies.  Carlos Gonzalez homered in the second inning, extending the team's current game streak to 11 with home runs.

Seth Smith continued his torrid pace with two singles, a triple and two RBI.  And hey look!  Miguel Olivo had the same line.  Olivo, the monster who hibernates away from the road and awakens in Colorado, is now 8-for-13 with 2 3B, 2 BB, 5 R and 4 RBI in his four games this homestand.  Every Rockie (including Cook) got a hit and either scored a run or collected an RBI except Todd Helton, who walked twice.

Aaron Cook wasn't perfect, but he was very good.   After the Rockies took a 5-0 lead in the third, Cook notched a quick 1-2-3 fourth.  When Colorado pushed three more on the board in the fifth, Red again put Los Angeles down in order to follow.  He took a three-hit shutout into the seventh before a Matt Kemp "triple" and Troy Tulowtizki error facilitated a three run inning.

This is the type of game Colorado sorely needed.  Granted, it doesn't guarantee anything.  The club pounced on Clayton Kershaw for a 9-0 lead and eventual 10-4 win April 26, 2009 only to stumble against Joe Torre's club the rest of the season.  But it can't hurt.  In fact, having Carlos Gonzalez, Seth Smith, Miguel Olivo and Troy Tulowitzki each on a ridiculous hot streak, any confidence will help in facing Kershaw tomorrow afternoon.

With the win, the Rockies pull back within one game of Los Angeles and 1.5 games back of Wild Card leading St. Louis. 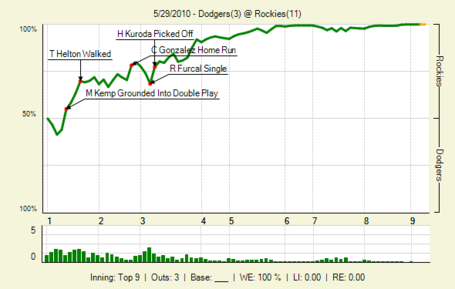 Those three were the only Rockies with negative WPA's for the game.  That's the sign of a team blow-out.