Well, it was Ubaldo Day again for the Rockies, a day on which our team is 6-0 with a +24 run differential (32-8). Jimenez (6-0, 0.87) allowed only a Yorvit Torrealba RBI double in the fourth of his seven innings pitched, who even hit 101 MPH in the first inning. It ended a 26 IP scoreless streak for Jimenez, a Rockies franchise record for a starting pitcher. The Padres tacked on a run in the ninth off a shaky Rafael Betancourt, but it wasn't enough to deny Jimenez and the Rockies the win.

Ubaldo struck out 13 Padres, a career high, and gave up only four hits and two walks while adding a RBI single of his own in the sixth inning to make it 3-1. Also adding some offense for Colorado were two-RBI hits by Clint Barmes (a second-inning double) and Carlos Gonzalez (an eighth-inning single).

With the win the Rockies moved to 3 games back in the NL West.

Graph and Call after the jump. 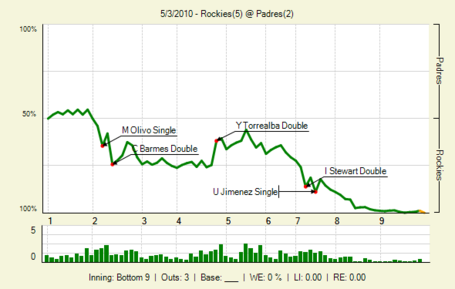