Dodgers 4, Rockies 3: All Occasions Do Inform Against Us

Share All sharing options for: Dodgers 4, Rockies 3: All Occasions Do Inform Against Us

It was just One Of Those Days for the Rockies. With the notable exception of Chris Iannetta's first-inning pop-up into shallow right that turned into a RBI single when Blake DeWitt lost it in the sun, it just wasn't the Rockies' day.

Case in point: the much-maligned Dodgers defensive outfield made several great plays, robbing multiple Rockies of extra-base hits and/or multiple RBIs. Brad Hawpe smoked a line drive at James Loney with two RISP in the third. The list goes on and on. Even with those great plays, the Dodgers committed three errors in the game.

Clayton Kershaw (5-3) was relatively unhittable for the Dodgers, getting nine punchouts in five innings, though he did walk four and give up four hits. The LA bullpen was even better, holding the Rockies to one hit (a ninth inning Ian Stewart double) and one run in four innings of sparkling relief. His opponent, Jhoulys Chacin (3-3), worked his way out of some jams but ultimately couldn't do it enough (two runs allowed in the sixth were one too many) and took the loss. Chacin went 5.1 IP, giving up four runs on seven hits, striking out six. Esmil Rogers added three sharp innings of one-hit relief.

Carlos Gonzalez did his part, making a couple of great catches and scoring a run, but the Rockies simply stopped scoring after the two-run first inning (on a Troy Tulowitzki single and the Iannetta pop-up) until the very end. They had two RISP in the third and loaded the bases in the fifth, but were robbed of the big hit both times. The Rockies made the ninth inning interesting, getting runners on the corners with one out on Jonathan Broxton, but it wasn't meant to be as only one run scored. Like I said above, it was just One Of Those Days for Colorado today.

The loss dipped the Rockies to two games behind the Dodgers (3.5 back in the West pending the SD result). They must now turn their attentions to the San Francisco Giants and an epic pitching matchup between Ubaldo Jimenez and Tim Lincecum. Bring it on.

Graph, etc. after the jump. 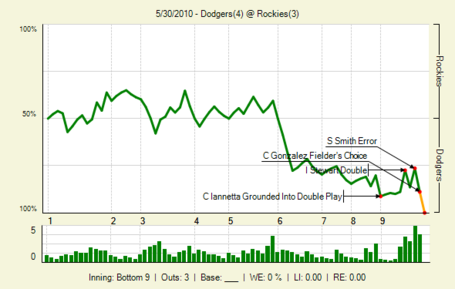