Share All sharing options for: Monday Rockpile: In Memoriam

Happy Memorial Day everyone. I say happy because many of us have today off from work, are going to enjoy barbecues, sleep in, maybe get some long overdue chores done around the house, and then eventually we're all going to settle down and watch today's epic matchup between Ubaldo Jimenez and Tim Lincecum.

Memorial Day may be a rougher day for many of you as well, as we take the time to reflect on the lives that have been given in the service of our great nation. Maybe it's somebody close to you, maybe you're simply appreciative of the service that others have put in so that you don't have to. Some of you may be veterans or active/reserve duty soldiers. Whatever the case may be, don't let today go by without at least taking a minute to think about the people you love and who are in your lives that have made a difference in wartime.

Today's Rockpile will take a different swing than normal, and we'll take a look back at baseball players who were drafted into the service of our nation. Very specifically, we're going to hone in on Hall of Famers Ralph Kiner, Phil Rizzuto, Hank Greenberg, and Bob Feller. Before you continue on, I recommend that you navigate over to Baseball in Wartime, an exhaustive website detailing the way that American Baseball changed during the Second World War. I'll be pulling a lot of information from there, but you can find more details about them and other players on the website. I should also mention that the title of today's Rockpile is more directed at the spirit of Memorial Day, as of the 4 players we'll be looking at, only Phil Rizzuto and Hank Greenberg have passed away.

Click past the jump. I hope you brought you reading glasses today, because we have a lot of material to cover this morning. 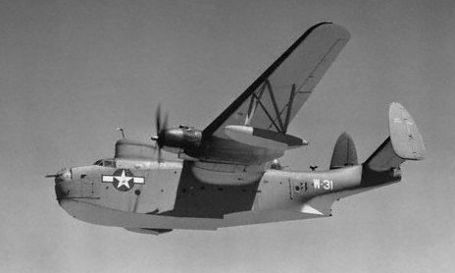 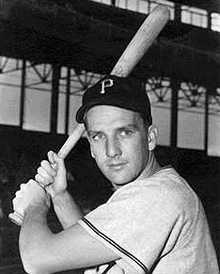 Ralph Kiner was an Outfielder for the Pittsburgh Pirates, Chicago Cubs, and Cleveland Indians during the late 1940s to the mid 1950s. Kiner had only begun his minor league career in the Pittsburgh system, batting a combined .264 before being drafted by the Navy. He received his pilot's wings in December of 1944 and logged over 1200 flying hours in the Pacific Theater. 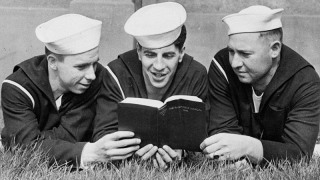 Phil Rizzuto played for 2 seasons with the Yankees, including a rookie year where he batted .307 and won the World Series with New York, before being drafted into the United States Navy. The beginning of his service in the Navy in 1943 was at the Norfolk Naval Training Station, where he played regular baseball with fellow serviceman (most notably Brooklyn Dodgers shortstop Pee Wee Reese). Later Rizzuto was a gunner (manning the 20mm) on a gunship in New Guinea, where he contracted malaria and was sent to Australia to recover.

Upon his return to the Yankees in 1946, Rizzuto fell flat on his face at the plate, but continued to provide excellent defense up the middle for New York. His career didn't stay flat, however. In 1949, Rizzuto finished 2nd in the AL MVP voting while the Yankees beat the Brooklyn Dodgers in 5 games in the World Series. In 1950, Rizzuto batted .324 while leading the Yankees to a sweep of the Phillies in the World Series while netting himself the AL MVP. Rizzuto retired with a career .273/.351/.355 batting line while being considered one of the all-time glovemen at the SS position.

After retirement from playing the great game of baseball, Rizzuto enjoyed 40 years in the Yankees broadcast booth, brightening fans with his trademark "Holy Cow!" expression. 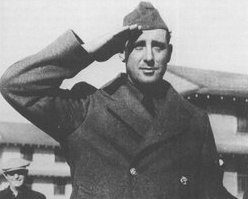 Hank Greenberg, the original "Hammerin' Hank" played for the Detroit Tigers from 1933 until 1947. During the 1940 offseason, Greenberg registered for the draft, and despite an initial denial due to flat feet, he was admitted for full service in spring of 1941. His farewell appearance on May 7, 1941, went quite well, as he belted 2 home runs and then reported for duty with the United States Army at Fort Custer. Despite being honorably discharged in December of the same year (as Congress released men aged 28 and over from service), Sergeant Greenberg re-enlisted two months later, citing the trouble the nation was still in and that the "only one thing for me to do" was to "return to the service". Greenberg participated in fundraising events Stateside, namely in the war bonds game that raised over $800M for the war efforts. In 1944, Greenberg went overseas with a field mission with the first squadron of B-29 Superfortresses, spending time in India, Burma, and China. 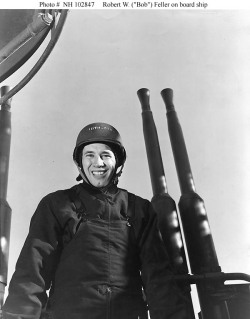 Finally, Bob Feller. Feller enlisted in the Navy the day after the Pearl Harbor bombing. After pitching for a year for Army-Navy fundraising, Feller expressed frustration with his situation and a desire to see combat. Feller then spent 26 months on the USS Alabama on an anti-aircraft gun crew. Upon returning to the USA in 1945, Feller was assigned to the Great Lakes Naval Training center, where he coached a baseball squad before returning to the majors.

Much like Hank Greenberg, Feller had already had rampant success in the Major Leagues before the beginning of WWII, posting a 3.18 ERA over 1448.1 innings, good for a 107-54 record. After returning from the war, Feller posted a 3.30 ERA over 2378.2 innings, going 159-108. 1946 was a pretty awesome year for Feller as well, going 26-15 in 28 games (42 starts), tossing 36 complete games, 10 shutouts, 371.1 innings, striking out 348 batters. You read that right. All of those numbers were also league-leading. Feller led the 1954 Cleveland Indians to the World Series after countless years of finishing 2nd in the AL to the Yankees, but they were swept by the New York Giants to finish their season. The Indians finished 2nd an awful lot to the Yankees during the 40s and 50s.

Feller was elected to the Hall of Fame in 1962 as a player.

There is some Rockies news to keep an eye on today, and some big stuff, to boot. I'm only going to touch on the biggest piece of news, so we'll bring more up as it comes.

This is a long time in the coming. I'm not terribly thrilled with anything about Dexter Fowler this season. His defense is still questionable (RZR loves him, UZR and TotalZone hate him), and his LHB v RHP swing frankly just sucks (34 wRC+). However, the one thing that I'm pleased with is his 166 wRC+ as a RHB v LHP. Everything is awesome about his right-handed swing.

What frustrates me even more about his situation is the handling of Dex. They decided to bench him, which is fine, Seth Smith is raking and Gonzalez can handle CF well enough. What drives me up the wall is how they're using him in the meantime.

Let's think about this. What is Fowler good at? Possibly defense (the eye test suggests he's very good, Ubaldo thinks he's good, and seeing how the metrics are split on him, I'm willing to give him the benefit of the doubt and call him good), and he's a beast batting right-handed v LHP. What does he suck at? Batting left-handed v RHP.

So the obvious reaction is "well, he can't switch hit, convert him", which I'm just about completely on board with. What kills me about this is the fact that he's clearly GOOD from the right side, especially against LHP, why on EARTH are 56 of his May PA coming against RHP? The answer can be explained away just by the ratio of righties-to-lefties in the majors, and I'm honestly ok with that answer. My confusion is coming in the whole "well, you've lost playing time as a starter, welcome to the land of PH/PR/Defensive Switch" area. I'm not wondering why they're not starting him, I'm wondering why they're choosing to PH him only in his worst situations. You want to bench him? Cool. You want to use him only as a PH? Cool. You want to only PH him against RHP? Not cool.

If you're only going to use Dex one time against one pitcher, why are we putting him in against pitchers he's far more than likely to suck against? It's as if we're setting him up for failure. This isn't even a Jim Tracy rant, because if it was JUST Tracy, you'd think that Tommy Runnels or Glenallen Hill or Richie Dauer or SOMEBODY would say SOMETHING to the extent of "well gee skip, if Fowler can't hit righties from the left side, why don't we just, oh I don't know, pinch hit somebody who can ACTUALLY hit from the left side, rather than watch him flail?"

The beef is really coming past the point of benching him. As a starter, he's gonna have to take the righties and the lefties as they come. But as a PH, it's entirely the coaching staff's decision when to put him into the game. They're putting him in in situations where he is FAR more likely to fail, and when he does, we say "Well Fowler is struggling and and and" rather than just putting him in to face lefties, or even knock said lefties off of the mound. Think about it, the Padres bring somebody like Joe Thatcher in. We bring Dex in from the right side. If they pitch to him, the probably going to be better. If they decide to turn him around by bringing in a righty, well, counter that by bringing in Jason Giambi (despite the fact that Giambi is somehow hitting lefties better than righties, if we're going to play matchups, we might as well, right?).

I think I've made my point and thoroughly expressed my confusion. I sincerely hope that this trip to the Springs is going to be the end of v RHP as LHB.