In a true ode to Petco Park, there were loads of baserunners in this game, yet only five of them came across the plate. Unfortunately for the Rockies, three of them were Padres - the last of which came around on a walk-off hit by Chase Headley (who atoned for grounding out into a double play in a high-leverage situation earlier in the game) at the expense of the struggling Franklin Morales.

Morales began the bottom of the ninth inning by making the egregious mistake of walking the leadoff hitter - Lance Zawadzki, of all people - and fell behind 3-0 on Adrian Gonzalez, which caused Jim Tracy to decide to put Gonzalez on base and take his chances with Headley. Headley then proceeded to smoke a ball into the right-center field gap, securing the victory for the Friars.

Greg Smith was inefficient but effective in five innings of work. He threw 96 pitches - just 54 for strikes - and allowed five walks, yet worked out of jam after jam and kept the Rockies in the game, and even put himself in position to earn the victory. After he exited, Matt Daley had issues getting out of the sixth inning and was replaced by Randy Flores, who uncorked a pitch to the backstop a few pitches later but quickly covered home and tagged out Kyle Blanks after a nice hustle play by Miguel Olivo. Joe Beimel gave up a couple of hits in the seventh but got away unscathed; the same can't be said for Manny Corpas, who notched a couple of strikeouts but allowed a triple off the bat of Will Venable and the ensuing game-tying sacrifice fly by Jerry Hairston Jr.

Offensively, the Rockies didn't do a whole lot. They scored both of their runs in the fifth inning when Greg Smith (who went 2-for-2 at the plate) led off the inning with a double and scored when Carlos Gonzalez laced a double of his own. Then, Todd Helton (who also had two hits) singled to plate Gonzalez. That was about it for the Rockies' bats,

Win probability graph, Rowcall, and tomorrow's starters after the jump... 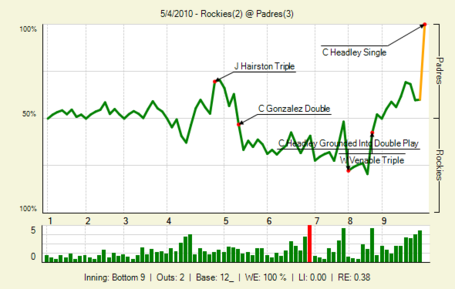