In what will possibly be the second-most memorable home run by a Rockie at Petco Park, Ian Stewart deposited a hanging curveball out of the hand of Tim Stauffer into the left field seats in the top of the 12th inning, giving the Rockies a 6-5 lead that this time, would not be relinquished. It was Stewart's fifth home run of the season.

Meanwhile, 2007 called - it wants its closer back. However, it cannot have him ever, as Manny Corpas shut the door on the rubber game of the 2010 Rockies' first road series victory. He pitched the final 2.2 innings of the game and allowed two baserunners (a hit and a walk), but no runs and struck out two. Corpas was the last of a long line of Rockies relievers who pitched scoreless ball tonight. The bullpen combined to pitch seven innings and allowed just TWO hits (and three walks) and racked up seven K's.

The game was back and forth from start to finish. The Friars got on the board first in the bottom of the second inning when Kyle Blanks doubled in Chase Headley. However, the Padres would relinquish that lead in the next half inning, as Melvin Mora drew a bases loaded walk and Clint Barmes smacked single into left field that plated Troy Tulowitzki and Carlos Gonzalez. Aaron Cook decided to be generous and return the favor (and more), as he allowed a four-run fourth inning and let the Padres reclaim the lead. He had some problems keeping the ball down, but his effort level was commendable. Things looked bleak for a minute until the sixth inning came around, when Barmes (double, RBI) and Seth Smith (triple, RBI) came through on consecutive plate appearances. After that, pitching and defense took precedence until the big blast by Stewart.

This game was certainly frustrating and awesome all wrapped in one, as the Win Probability Graph (which is included after the jump) can attest to.

Win Probability Graph and Rowcall after the jump... 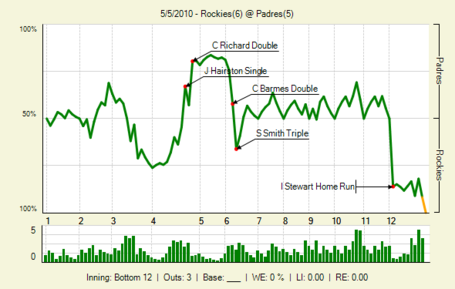