A couple of long time nemeses helped the Dodgers beat the Rockies in a frustrating six to five loss Friday night. Andre Ethier had a pair of hits and a pair of RBI as well as a run scored, Matt Kemp hit the game winning triple, and Jonathan Broxton shut the Rockies down yet again. Different year, same story.

The Rockies got on the board first in the second inning when Troy Tulowitzki walked, stole second and advanced to third on a Carlos Gonzalez groundout. Tulo scored on a sacrifice fly from Ian Stewart. The Dodgers answered back, manufacturing a run of their own in the bottom half of the inning when Jamey Carroll singled home Casey Blake with two outs, and added a second run an inning later to take the 2-1 lead. In the fourth, Tulowitzki again took a proactive approach to scoring, hitting a lead-off double and tying the game on a Carlos Gonzalez single.

Tulowitzki led off both those innings by doing something that the top of the Rockies lineup seemed utterly incapable of at first: getting safely on base. Seth Smith, Dexter Fowler and Todd Helton were a combined zero for six with three strikeouts and three weak ground outs their first two times facing Dodgers starter Hiroki Kuroda. Smith broke that streak in the fifth inning by leading off with a single and Fowler followed with a single and heads up advance to second of his own. After Helton lined out, Tulo walked and Gonzalez hit a sacrifice fly to score Smith, giving the Rockies a three to two lead.

Esmil Rogers had been pitching fairly well up to that point, but be it from not getting stretched out or letting the Dodgers get intimately familiar with his pitches through inefficiency in the first four innings, he fell apart in the fifth, allowing three runs to return the lead to Los Angeles. The Rockies rallied in the sixth inning to tie it, but lost the lead again in the bottom half when Matt Kemp tripled home Carroll off of Matt Daley.

This would become the first lead of the game for either team to last more than half an inning, as the Rockies failed to capitalize on another scoring threat in the seventh and went quietly in the eighth. Jonathan Broxton did what he normally does to the Rockies in the ninth, pound them into humble supplication to their feared overlords in Los Angeles. 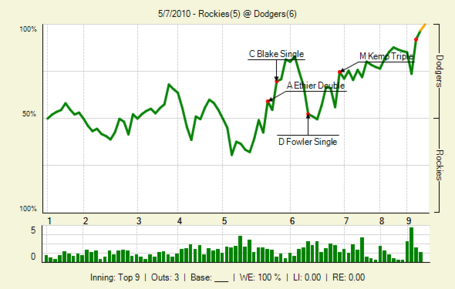