Today, we found out what would happen if I made a start in the big leagues against teams not named the Houston Astros: five batters, five runs, three walks, no outs recorded. That was the line for Dodgers starter Charlie Haeger (0-4, 8.49) today.

In all the Rockies scored six runs in the first inning and coasted to a 8-0 victory over the Dodgers to reach .500 yet again (15-15). Should they win again tomorrow (and with Ubaldo pitching this is more likely than not going to happen), the Rockies would pull off a 5-4 west coast road trip despite being crippled by injuries. They will come home for a three game set against the Phillies on Monday.

Jhoulys Chacin (2-0, 0.00) earned his second win in as many starts by again befuddling the opposing team and holding them scoreless. The Machine allowed only six hits and two walks in 7.1 IP, striking out seven in the process. Randy Flores and Joe Beimel preserved the shutout victory. The only minor cause for worry was Chacin's pitch count of 117 (73 for strikes), though that concern is mitigated somewhat by the fact that he had an extra day of rest prior to this start.

Helping to provide Mother's Day tacos for the Rockies were Carlos Gonzalez (bases-clearing triple in the first), Ian Stewart (3-4 with 3 RBIs, including a two run shot -- his sixth -- in the first immediately following Gonzalez's triple), and Troy Tulowitzki (2-3 with 2 BBs and an RBI). All around it was a great day for Colorado and it translated into an easy Saturday night victory. 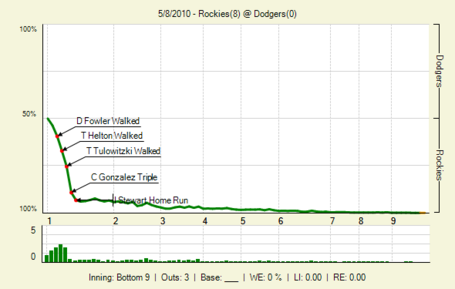 We Are Mildly Disappointed In: Nobody, actually. Everyone did well.