Dodgers 2, Rockies 0: Ubaldo Jimenez is Fallible After All

Share All sharing options for: Dodgers 2, Rockies 0: Ubaldo Jimenez is Fallible After All

Ubaldo Jimenez continues to feel what it is like to be a Cy Young pitcher.  Unfortunately today, his performance was similar to one Zack Greinke.

Jimenez turned in a solid game score of 70, allowing just two hits through seven innnings, achieving the third most ground balls in a game this season.  Unfortunately, both hits came back-to-back to lead off the third inning, with Jamey Carroll driving in Blake DeWitt, who had doubled.  Matt Daley served up a solo home run to Russell Martin for the final tally of the game.

The formula for beating Jimenez proved to be a shutout performance from Clayton Kershaw.  The 22-year-old southpaw outdid the Saturday performance of the Rockies 22-year-old phenom by holding Colorado to two infield singles.

It was about time for Kershaw to break out after some poor performances recently, and the opponent could not have come at a better time.  After today's performance, Kershaw is 1-0 with a 0.70 ERA against the Rockies in his last four starts against the Rockies, allowing just ten hits over those 25.2 innings.

The series loss extends the Rockies series streak to eight against Los Angeles and prevents them from a surprising 5-4 road trip.  To be honest, 4-5 is more than acceptable given the circumstances the team is in right now.   But even though Brad Hawpe, Jason Hammel and perhaps Chris Iannetta could return in the next series, the club will be without two of their most important hitters.

Carlos Gonzalez will be out until Wednesday, as his uncle recently passed away.  Troy Tulowitzki strained his right quad (the same injury he suffered in 2008) trying to turn a double play.  The length of time he will be out is unknown for now. 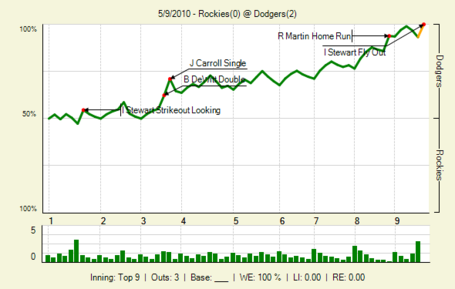