Rockies Review: The gangsta bus is still struggling to find a gear apart from neutral

Share All sharing options for: Rockies Review: The gangsta bus is still struggling to find a gear apart from neutral

You know, I'm almost positive I've written this Review before. You know, the one where we show flashes of promise, turn in a few great pitching performances, win a series, but ultimately end the week with a kind of sour taste in our mouths, thanks to a possibly problematic injury and a flat disappointing effort -- continuing our pattern of win, lose, win, lose, win, lose, lose, which has led us to a pretty-good-considering-it's-May-but-really-what-the-hell mark of 15-16. Most of us, myself included, will be at least somewhat satisfied with a 4-5 road trip that took us through notoriously hostile West Coast environs, but I'd say we're the definition of "treading water" right now, still in the position of waiting for a hot streak and getting all the pieces to click at the same time. Aside from the Machine, who I suggest should be christened Robin if he keeps this up (of course, we will need to see how he does when not starting in a pair of pitcher's parks at night, etc etc) and Batman Jimenez, the gangsta bus is put-putting rather than pedal-metaling its way down the highway. This is, as you may expect, an irritating state of affairs.

There are a few reasons for this. One of them is just past the jump. WARNING: It is highly disturbing. Click over if you dare. 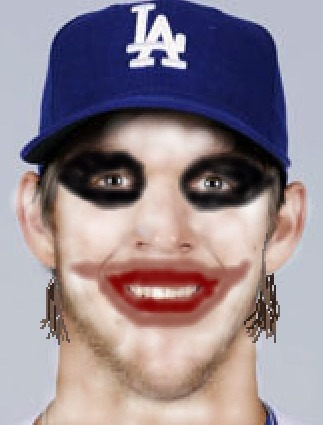 Yes indeed, folks, that is what Batman ran into today, and sometimes you just have to accept that you have been out-nemesis'd. Today, Kershaw did what Kershaw will eventually do to you, and at least it wasn't Jamie Moyer or something that shut us down. But it's still a pretty annoying game to lose. It would have bolstered us to a winning record on the road trip and enabled us to win a series against the Dodgers for the first time since bipeds became featherless. As has been pointed out, that is one bugaboo that we are going to have to exorcise post-haste if we are going to continue to cherish NL West aspirations. (The other is to find someone besides Batman and Robin who can reliably give us a good start, and get Todd Helton the hell out of the three spot. More on that later.) In fact, this applies to the whole of the NL West. The Rockies, for whatever reason, have never been able to be consistently successful within their own division, and I don't need to tell anyone how much their inability to square off with the Dodgers killed them last year. This year, they don't even have the excuse that the Dodgers are leading the division, because they're not. The only blowout was fortunately in our favor, and I know all the canards about close games, not getting lucky, balls have to start finding holes soon, stats show we're getting the short end of the stick, Bruce Angel Dreckman was behind the plate today, etc etc. Point is, pretty soon we're going to have to start playing good, not just lucky. I believe the team has had only one winning streak all year.

Seems I have a lot of things to carp about this weekend. The first: We all love Todd Helton, we always will love Todd Helton, he's given us a Hall of Fame career and you can't be a Rockies fan without having mad respect for what he's done. That said, it's a good thing he took that contract deferral, because he's playing like... well, family friendliness prevents me from being quite as colorful as I'd like to be, but while Todd's defense is still great, it doesn't possibly warrant continuing to run him out there in the three-spot. Helton has essentially devolved into a glorified singles hitter who's struggling to even reach the warning track, and barring some kind of heat-up with the weather, we may have to bite the bullet and slide him down the order -- as in seriously slide him. It's not like Giambi's any better, and is in fact a serious D downgrade, but the man is 36 and has back problems that have taken a considerable toll. I'm sure Todd's his own biggest critic right now, and the ongoing lineup shenanigans certainly aren't helping anybody, but this is one place where a shakeup is probably warranted. Do it, Jim.

Secondly: I can't imagine there was a denizen of Rockies Nation who didn't say, "Oh, crap" when Tulo got taken out of the game today, with what turned out to be a quad strain. As Thomas Harding notes, he was quick to point out that it was the other quad from the one that cost him 46 games in 2008, but that's not particularly comforting. Does anyone really want to see Barmes/Mora, Double Play Partners? I didn't really think so. The injuries are starting to get slightly ridiculous, so if you have a live rooster, now's the time to sacrifice it. At least those on rehab assignments appear to be progressing nicely, right in time for Jason Hammel to come back and start at home against... the Phillies?

It's an uncomfortable position, for sure. What's a Rockies fan to do? You could always turn into Mark Kiszla and start shrieking about how it's time for the Rockies to make a "big deal," with only the presence of Ubaldo Jimenez saving them from being "among the worst teams in baseball." I think it's a mistake to take that kind of stuff seriously, as Kiszla's job is to be a fire-starter (after all, he's the same guy who called on the Monforts to sell the team early in 2007) and whoever he has in mind to trade to get Roy Oswalt or whoever, is undoubtedly a brilliant innovation that will save the season and yadda yadda. I for one do not think it's time to sell off the farm for a half-season of Cliff Lee or something, but I will agree with the general sentiment that it's getting around the point in the year where the Rockies should cut out the yo-yo act. I really don't know why it's so hard for them to embark on a sustained run of success without a little adversity to spice the pot beforehand, but hey. Maybe they need more excitement in their lives.

Fortunately, most of the injured guys are on their way back quickly, so maybe Tulo will follow the mold. However, we'll have to see what is done with them. When Brad Hawpe gets back, Tracy has announced his intention to put him back in the five-spot, moving Carlos Gonzalez back to leadoff. As long as Hawpe is still hitting the ball the way he was before he was injured, this will be fine, but I honestly feel that CarGo is too potent a threat to waste at leadoff. Let EY2 or Fowler hit there, we need all the runs we can get right now, and the LAZOR is less useful when it has nobody to fire at. I must have complained about this in every other Review this year, but the chameleon-like quality of the lineup is really starting to aggravate me. If a certain combination scores 12 runs, Jim, you can, you know, stick with it.

A few other complaints, since I'm in a complaining mood:

-- I am beginning to weary of Franklin Morales.

-- I am also beginning to weary of EY2 in left field. See: First game against the Dodgers.

-- Esmil Rogers does not appear to be big-league ready. He's had flashes of promise, but doesn't look anywhere near on the level of the Machine. I dunno if he or Hammel is the better option right now.

-- YEAH THE LINEUPS DID I MENTION THAT

In the interest of fairness, however, I should also include a list of good things:

-- We didn't get totally obliterated on the road trip

-- Jimenez-n-Jhoulys, Batman-and-Robin, the Latino Lightning, or whatever else you want to call them, are very, very studly

-- /add your reason for optimism here

I will close this Review as, again, I feel I have spent a lot of time doing: We're still waiting, guys.

P.S. Today, as I am sure all of you remembered, is Mother's Day. Give that special momma in your life a big hug today (or, if you're half the country away from her as I am from mine, a phone call.) Remember, it's cool to love your momma. Ubaldo Jimenez does.

P.P.S. Speaking of Ubaldo Jimenez, he got company in the no-hit department today (and actually slightly one-upped) when Dallas Braden of the Oakland A's (a good friend of our own Greg Smith) fired a perfect game. Braden faced the Rays, a good team to face if you want to throw a perfecto, and afterwards gave his grandmother a big big hug; he lost his own mother to cancer when he was in high school. It makes for affecting video; go watch it.

So, Ubaldo. What you got for an encore?