Why was this game even played? After a nearly two-hour rain delay, the game started but the rain still kept on falling. Ubaldo Jimenez became just a little bit human when he allowed a run-scoring triple in the second and a two-run homer in the third to Aaron Hill. And he walked five Jays. His ERA rose to 1.16, which is still damn good. He also picked up his 12th win of the season.

Ryan Spilborghs and Carlos Gonazlez each hit a homer, both solo shots. Clint Barmes, Miguel Olivo, and Seth Smith also joined in on the run production by using the double, the single, and the sac fly, respectively. As SDcat09 commented, "Hey, Ricky Romero...how does it feel facing an NL lineup?"

An awfully long night for the Rockies and the fans, but a Rockies win makes it all better. 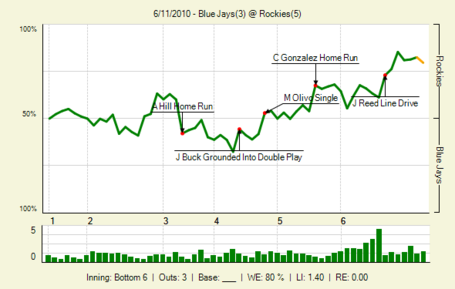 Well, you get how the graph looks at the end.