We were unable to see vintage Ubaldo Jimenez last night, so he decided to show up in the guise of Jason Hammel tonight. Hammel fired off eight shutout innings against the Jays, but just a few minutes into the game things looked bad for Hammel. Manager Jim Tracy and the Nuggets' trainer (he's with the team right now for some reason I haven't heard) came out to see if Hammel was all right. Whatever the issue was, it didn't take Hammel out of the game and it didn't hurt him over the rest of the contest.

What makes Hammel's outing even better is that he scored the only run of the game as well. He started off the sixth inning with a walk and eventually scored on a Carlos Gonzalez sac fly. Of course, his offensive WPA was -0.009. His pitching WPA, on the other hand, was a very manly and robust 0.614. Hammel also had a nice grab on a ball lined back up the middle early in the game.

Todd Helton showed signs of life with two hits. One was a double that hit off the yellow on top of the outfield wall. He didn't look too great on the base paths. He tried to advance to third after the double when CarGo hit into a ground out to third. However, being aggressive didn't pay off as he was thrown out. Then in the sixth, Helton was on second base with Ryan Spilborghs at the plate. Spilly singled and Rich Dauer sent Helton to home plate. He was out by several feet.

This was the Rockies' eighth shutout of the season, now tied for most in any Rockies season. It was also the ninth 1-0 game in the history of Coors Field.

Will you look at that. The Rockies have 100 games left. It's going to be a fun summer. 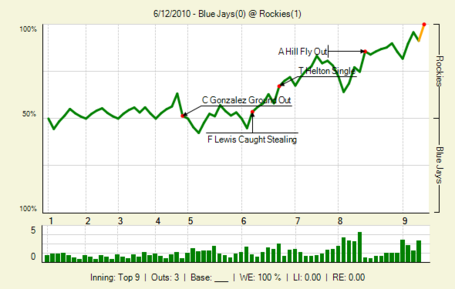