With the blowout win today, the Rockies swept the mighty Jays and pushed their league-leading interleague record to a scalding 5-1 record, beating Ricky Romero and Zack Greinke in the process.  If you're counting, that's a blistering 44-25 mark since 2006.

The Rockies provided an early rude welcome back to MLB to Jesse Litsch, who had missed the last 14 months due to Tommy John surgery.  Arguably rushed back early, the Rockies led off the bottom of the first with three singles on their way to batting around and plating four runs.   Clint Barmes doubled in a run and Chris Iannetta blooped in two more.  In all, the Rockies 5-8 hitters were 6-for-7 with a walk, 5 RBI and 4 runs off Litsch.

Ryan Spilborghs started for the third consecutive game in place of the struggling Seth Smith (see how being in the AL and using the DH could benefit us?), and Spilly rewarded Jim Tracy with two home runs and a triple. Clint Barmes doubled twice, Todd Helton singled three times, Carlos Gonzalez hit his team-leading 10th home run and 40th RBI, and Chris Iannetta singled twice to extend his hitting streak to five games.  Even Jeff Francis (2-2, 3.29) knocked in a run with a sac fly.

Speaking of Francis, The Physicist deftly maneuvered through the powerful Jays lineup, holding them to three runs (two earned) on five hits over seven innings, pulling him back to .500 on the season

With the victory today, the Rockies beat the Jays with their bats.  Yesterday, they won with starting pitching.  Friday, the W came from timely hits and grission on the mound.  Winning different types of games is indicative of a good team.  Hopefully that will continue.

The Junior Circuit seems to be aptly named when the Rockies represent the National League.

A few other game notes: 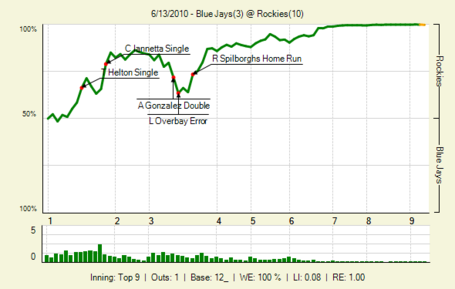