Twins 9, Rockies 3: Minnesota finds holes-o'-plenty as Rox strangely end up on the losing end of a blowout

Share All sharing options for: Twins 9, Rockies 3: Minnesota finds holes-o'-plenty as Rox strangely end up on the losing end of a blowout

Aaron Cook has had some issues with his command this season, particularly on the road. That is an undeniable fact. His 0-3 record and 6.81 ERA entering tonight's game were completely indicative of his struggles away from Coors Field. After tonight's game, one more loss can be tacked onto that record and the ERA will go up, but Cook did not experience the same poor command and lack of sink on his fastball that he had in previous road starts. Instead, he was severely bitten by a case of bad luck, and the end result was a six-run loss to one of the best teams in the American League.

Cook surrendered five runs on six hits and two walks in the fourth inning alone, as the Twins hit seeing-eye single after seeing-eye single and eventually chased the obviously frustrated Cook before he was even able to get the second out of the inning. Cook's strike zone was admittedly squeezed throughout the first few innings (especially the fourth), and five of the hits he allowed were grounders that could have just as easily found a glove and gotten him out of the inning, which is what happened when Franklin Morales entered the game and promptly induced a GIDP off the bat of Joe Mauer.

The Rockies got off to a fairly quick 2-0 lead after a Troy Tulowitzki homer( 9) with two outs in the first and a Carlos Gonzalez RBI triple with one out in the third. However, that fourth inning proved to be the club's downfall. The Twins tacked on a couple more runs in the fifth when Jason Kubel homered off of Morales and Denard Span singled in Delmon Young, who doubled on the first pitch following Kubel's homer. Todd Helton then tried his best to ignite a rally by sending an offering from Carl Pavano into the right field bleachers for his second homer of the year. However, the Rockies were unable to do anything else offensively after that, and went down by yet another run after Matt Tolbert connected on a Rafael Betancourt fastball to make it 9-3.

The Rockies only had six hits (although they did square up a few balls), two of which came off the bat of Seth Smith (2-for-4). Clint Barmes did his part as well, by getting on base twice in three plate appearances (double, walk) and scoring a run. On the flip side, Jason Giambi and Miguel Olivo were each 0-for-4 with two strikeouts. Not a whole lot of positives on the pitching front either, though Randy Flores did work two scoreless innings.

WPA Graph and Rowcall, and tomorrow's starters after the jump... 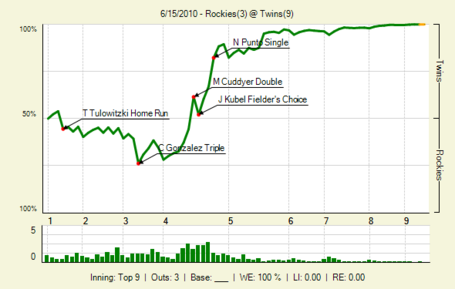