That's how many times Scott Baker struck each of them out in this game. Helton struck out three times total, the other one by Jose Mijares.

Tulo and CarGo singled in the first and third innings, respectively. Smith's hit was a double off of Matt Guerrier in the eighth, and Smitty eventually scored as a result of a sac bunt that moved him to third and then a passed ball by Joe Mauer allowed him to score.

Jhoulys Chacin allowed both runs on a bunch of singles in the second inning. In Chacin's last inning of work, Mauer was intentionally walked to load the bases so the double play could be set up. Justin Morneau came to the plate and promptly hit into the inning-ending double play. Matt Belisle and Joe Beimel held the Twins in check for the last three innings, the former allowing the only Twins hit after the fifth inning.

Our offense is very peaceful

Practically Gandhi-like in their pursuit of non-violence. 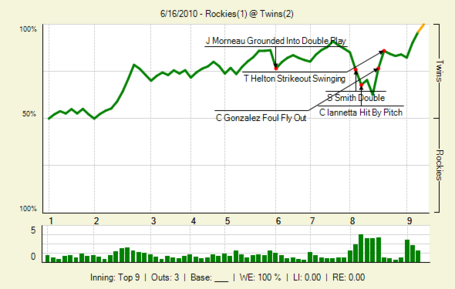