Ubaldo Jimenez showed himself a master of the groundball game today in winning his thirteenth game of the season in his fourteenth start, as he led the Rockies to a five to one victory over the Minnesota Twins. While he ran into some mild traffic, Jimenez induced three inning ending double plays early and pitched seven scoreless innings before allowing a run in the eighth to lower his ERA to 1.15 on the season.

So while certain historic numbers (Bob Gibson's 1968 ERA mark of 1.12, 30 wins) are hanging around as sugar plum dreams in the minds of Rockies fans for Ubaldo's 2010 season, there are certain standards in these categories that people who understand the way the game has evolved over the last thirty years find no less tantalizing. Keeping in mind once more that wins are overrated, and ERA's not  the best standard for measuring a pitcher, they are still sexy stats to most baseball fans and there's a certain cache to having a prodigious season with them.

With approximately 19 starts left, Jimenez has a solid shot at winning 25, something no National League pitcher has accomplished since the advent of the five man rotation (Steve Carlton won 27 in 1972) and while reaching Gibson's high mound ERA record would be great, I'll once again reiterate that Dwight Gooden's 1985 mark of 1.53, remains surprisingly within reach for Jimenez and should be considered no less impressive a feat. Any sub-2.00 ERA by a Rockies starter would have been nearly inconceivable five years ago. Jimenez has already started to stretch our ideas of what is and is not possible a mile above sea level.

Troy Tulowitzki tripled in the Rockies first run, but later was pulled after getting hit on the wrist by a pitch. There's been no word yet on the extent of the injury. Tulo's triple was part of a three run first that essentially put the game on ice for Jimenez before the game began. Ryan Spilborghs added a two run home run in the eighth to insure the Rockies would leave this game victorious. The Rockies avoided the sweep and will next take on the Brewers in Denver. Jason Hammel, who has been pitching very Ubaldo-esque of late gets the start tomorrow night.

Quince de Ubaldo is coming up in Denver next Wednesday against the Red Sox, be sure to buy presents for all your loved ones.

Sacrilegious icons and Fangraph after the bump: 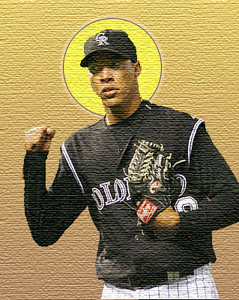 Thanks to Maria M 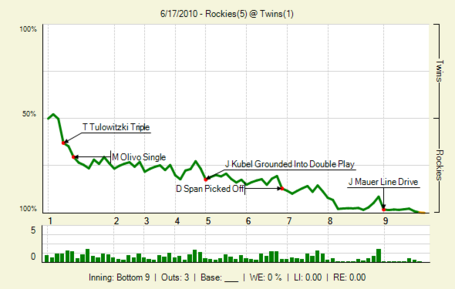