After the Rockies beat the Brewers 2-0 on Friday, it's become apparent to me that we need some kind of "Spahn and Sain and pray for rain" slogan for our two best pitchers right now.

At any rate, since returning to the rotation from the disabled list and combining with Ubaldo Jimenez on a double-header sweep over Washington on May 15th, the Rockies are now 13-1 in Jimenez and Hammel starts. Jason Hammel hasn't allowed a run since June 1st, and after 7.1 shutout innings tonight has run up an unimpressive 26.1 scoreless inning streak. Hammel also helped with his bat, as the pitcher got an RBI via a key suicide squeeze in the second inning (scoring Ian Stewart) and also hit a double.

Brad Hawpe hit two doubles and had the Rockies other RBI in the win. Rafael Betancourt and Manny Corpas supported Hammel in relief, Joe Beimel not so much.

Another win coupled with losses at the top of the division (LA and SF so far, SD's in progress) means that the Rockies climbed a little back into contention tonight. Keeping those gains over the rest of the series could be important. 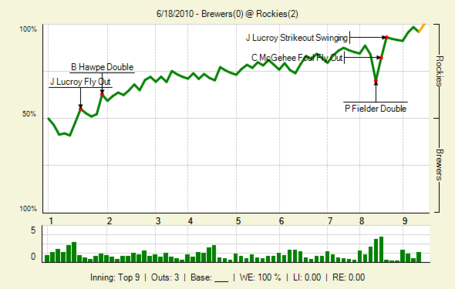