Brace yourselves for this bomb I'm about to drop on your pretty little heads: CLINT BARMES HAS FOUR OF THE ROCKIES' 5 RBI'S IN THIS SERIES, INCLUDING BOTH GAME WINNERS.

You already know that by now, but I bet you still did a double take when you saw that. The man who has been so maligned for his performance with runners in scoring position got the job done for the Rockies for the second straight day. In the seventh inning, Barmes plated Miguel Olivo with a sacrifice fly (although Olivo arguably should have scored the play before that, when Melvin Mora's double was interfered with by a fan, hence allowing Olivo to advance only two bases). Barmes then drove in the winning run with a two-out RBI double down the left field, scoring Olivo (who singled earlier in the inning).

Jason Hammel deserves a ton of credit, as he kept the Rockies in the game by allowing just one run in 6.2 innings (on an Andres Torres solo home run). He allowed just seven hits but more importantly, did not walk a single batter and struck out five. As has been the case for most of the season, the Rockies' bullpen was nails, as they combined to toss 4.1 innings of scoreless relief. Manuel Corpas, who picked up his fifth save, allowed the only hit, but even that should have been ruled as an error. It didn't matter, as he got Pablo Sandoval to hit into a game-ending double play. Joe Beimel struck out the only batter he faced, then Matt Belisle struck out three batters in two innings and Rafael Betancourt whiffed a couple in his inning of work.

The Rockies' offense didn't do a whole lot against Barry Zito (as per usual), but did have a few scoring chances. Ultimately, Zito allowed just a run on four hits in seven innings. He struck out eight Rockies. Guillermo Mota pitched a perfect eighth before the Rockies started to make another push. Todd Helton doubled off of Brian Wilson to lead off the ninth and was replaced by pinch runner Jonathan Herrera. Sandwiched between strikeouts, Brad Hawpe was intentionally walked. So, with runners on 1st and 2nd, that set the stage for Melvin Mora, who laced a single into right field. Unfortunately, Torres was playing shallow and was able to come up throwing very quickly, and ended up gunning down Herrera at the plate for the third out of the inning. The Rockies then squandered another scoring chance in the tenth inning after Barmes and Jason Giambi hit consecutive singles. With runners on the corners and nobody out, Carlos Gonzalez and Ryan Spilborghs hit consecutive grounders to the absolute wrong place (3rd base), then Herrera popped out to end the inning. The Rox finally broke through with their furious two-out rally in the 11th.

The 6-7-8 hitters (Olivo, Mora, and Barmes) combined to go 6-for-11, scoring both runs and driving both in, as well. With the win, the Rockies swapped places in the NL West with the Giants. Also, during the post game interview, JIm Tracy announced that Esmil Rogers will be optioned back to Colorado Springs, with Franklin Morales returning from the DL to take his place. 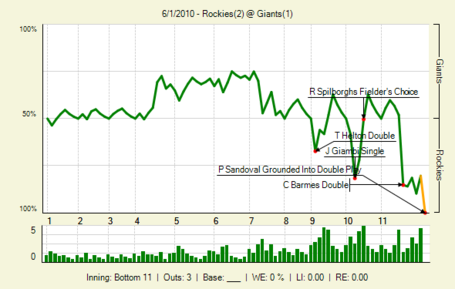