The Rockies arrived at AT&T Park today with the rarest of all opportunities.  No, not a perfect game.  Those occur about as often as a successful save by the Diamondbacks.  I'm talking about a sweep of the Giants in San Francisco.  Okay, so it didn't happen, but winning a series on the road against Tim Lincecum, Barry Zito and Matt Cain is an incredible accomplishment in itself.

Just as he did to begin his last start, Jeff Francis was dominant for about half of the game, when he appeared to lose steam.  Following two two-out singles in the fifth, Francis left an ill advised 86mph up and over the plate, which the ice cold Aaron Rowand rocketed over Carlos Gonzalez in center.

After two solid hits, a walk and two line drive outs, Francis left for the evening.  After being out of the game for a year and a half, it seems obvious that The Physicist has yet to build up arm strength.  This is something Jim Tracy needs to keep a keen eye on so as to mitigate the volume of the floodwaters when Francis wears down.

Matt Cain had thrown complete games in his last two starts, not allowing a single earned run.  From that perspective, the Rockies hit him hard.  Troy Tulowitzki turned on a high 93mph fastball for his seventh home run and the Rockies' only run.  Other than that, Cain just owned the Rockies. 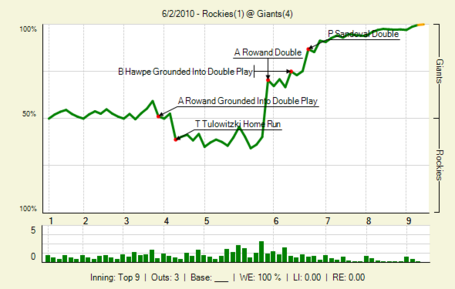 It was a quick, boring game, so only one centurion tonight. Paleface had 188 posts, more than twice any other Rowbot.