Share All sharing options for: Rockies 8, Brewers 7: Colorado Finally has a Comeback Victory

Well, it only took 68 games for a real, honest to goodness comeback win for the Rockies. And I must say, their timing was excellent, as the Second Annual Rowbot BBBQ was in attendance. With the victory, Purple Row's record in official gatherings is now 2-0. There's a lot to write about, but since it's late and I'm tired, I'm sure that someone will give a more thorough write-up of the BBBQ experience at a later date, but for now I'll just give you a quick recap of the game.

It was a nice crowd of nearly 40,000 tonight, who enjoyed great weather (and losses by the rest of our NL West rivals)...and who did it without doing the wave. This was a pleasant surprise to me at least.

We witnessed an acceptable performance by Jeff Francis (6.1 IP, 4 R on 8 H, 5 Ks), who left the game down 4-1. We saw Todd Helton lose a ball in the sun and scoring a run for the Brewers. We saw Johnathan Herrera bat leadoff (???) and go 4-5 (what??). We finally saw Melvin Mora start in LF...over Seth Smith versus a RHP starter. Of course Smith enters as a defensive replacement for Mora and smacks a two-run homer (which I totally called) and a RBI single. We saw the major league debut of Chris Nelson, who scored a crucial insurance run by bowling over Milwaukee catcher Johnathan Lucroy. We saw Jim Tracy go to five relievers, few of them effective (though Matt Belisle got the win, running his record to 2-3). At one moment we were resigned to a Rockies loss, the next a euphoric feeling of the successful late inning comeback, then the stress of the bullpen giving it back, and finally the relief at the end of that interminable last at-bat.

We saw the Rockies down three runs, up four, and then only up one with the bases loaded against them--and that was in the span of two innings. The Rafael Betancourt-Lucroy at-bat to end the game seemed to stretch for an eternity. It didn't help that Betancourt (who got his first save of the year) waited a full 12 seconds after coming set on each pitch before starting his motion.

These were the remarkable circumstances that led to a Rockies come from behind thriller, in my opinion their most entertaining victory of the year. And since all other NL West rivals lost, Colorado crept up to 3 games back of the Padres for the division lead.

A crazy graph and more after the jump 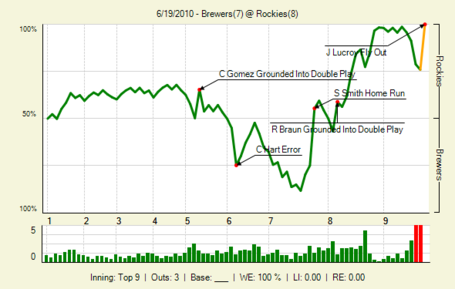