Share All sharing options for: Brewers 6, Rockies 1: Brewers Double Down on Corpas

After Friday's scoreless outing, Manuel Corpas sported a sparkling 2.37 ERA.  In less than 48 hours, that has rocketed to 4.19.  That is what going 0.2 IP with 8 ER allowed will do.

The "whole pile of ugly" ninth inning, as Jack Corrigan called it, started in a 1-1 stalemate.  Corpas came in to face the bottom third of the Brewers' lineup but did not fare well.  He allowed a double, fielded a bunt and threw the ball away, walked the legendary Joe Inglett, then served up doubles to Rickie Weeks and Cory Hart.

Weeks' double hit the yellow barrier above the bullpen wall, inches from a grand slam.  After his three-run home run last night and double today, Corey Hart has 5 RBI off Corpas in the last two games combined.  Juan Rincon came in and struck out three, but not before permitting a double to Prince Fielder for the final tally on Corpas' line.  Corpas was pitching for the fourth consecutive day, which might have led to the meltdown.

Prior to the ninth, the game was a boring exercise in futility on both sides.  The Rockies were 0-for-5 with RISP and the Brewers a miserable 1-for-9 before the three doubles in the ninth.

Cook was 2-0 with a 2.64 ERA at Coors Field coming in (against 0-4, 7.39 on the road) and improved that line.  He worked around that annoying lingering wildness but got plenty of groundballs, many weakly hit.

I guess we are ready to bring back Huston Street, huh? As much as he might have helped today, the fact that the offense managed to get just one run on three hits against Randy Wolf today continues a disturbing trend.  I have seen Street take BP (batting practice, not what you thought), and he can handle the bat.  Maybe he can play first base?  Because he won't be the closer.  At least not to start.

Jim Tracy spoke after the game and essentially said "Manny Corpas is still Manny Corpas.  He made a few bad pitches today and we paid for it, but he has done very well this season up to this point.  We'll get Street's feet wet before we put him in a closing situation." 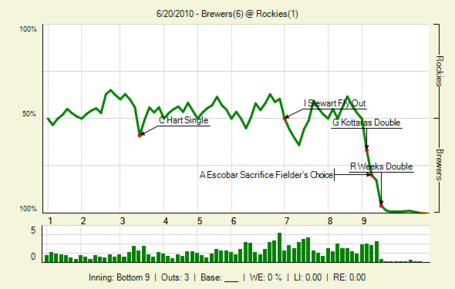