Down 5-6 in the bottom of the ninth inning, Ian Stewart stepped to the plate and took a ball. The next pitch wasn't as lucky, as it was blasted, into right field to tie the game at six. Clint Barmes got a single and was successfully moved over to second on a Ryan Spilborghs sacrifice to first. Jason Giambi pinch hit for Johnathan Herrera and followed the Ian Stewart method of hitting a home run: a ball, then a mammoth shot to right field.

Because it received 15 recs in the overflow thread:

This is our house. You are not welcome here.

Ignorance of the American League is a sign of good moral character.

Ubaldo Jimenez battled the last remnants of the flu and was out there for an inning too long. Up 5-2 entering the sixth, U-Ball lost it and gave up the lead, 6-5 Red Sox at that point. Yes, this is what you would call an unimpressive start. It was his shortest outing of the season (5 2/3 innings) and the six runs allowed were also the most he allowed (before this the most he allowed was three in that rain-shortened game against the Jays). However, he did strike out seven and he didn't get the loss.

Huston Street made his season debut in the sixth inning when he relieved Ubaldo Jimenez. He got that out and then pitched the seventh inning. He struck out one and allowed a hit in his first game back.

Well, this is one of those games we might call a season-changer, but I'm too much of a historian to make that judgment yet. 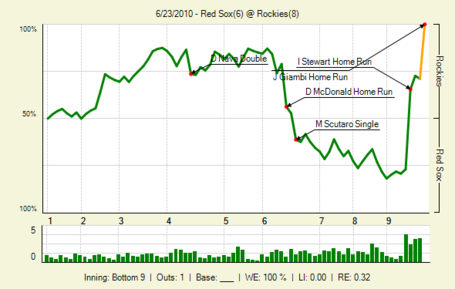