Rockies lose close game to Pedroia, Red Sox and the zombies of time.

Share All sharing options for: Rockies lose close game to Pedroia, Red Sox and the zombies of time.

Okay, so it's sort of hard to blame an offense that scored eleven runs, the bigger burden of this loss goes to the pitching staff that could not figure how to pitch (or seriously, by the end, just not pitch) to Dustin Pedroia, who went five for five with three home runs, including the tenth inning game winner. The game dragged for over five hours, and through its turns the inability of any Rockies pitcher to handle Pedroia remained its one constant. 13-11 was the final outcome.

After a while though, all the luck, the suck and the muck gets kind of garbled and you end up blogging mush-mouthed or envisioning the seas of spectators as the living dead. Take it away Xan Brooks:

8.40pm: It's 56 games all and darkness is falling. This, needless to say, is not a good development, because everybody knows that zombies like the dark. So far in this match they've been comparatively puny and manageable, only eating a few of the spectators in between bashing their serves.

Yeah, that's about what it was like over here on this side of the pond watching Daisuky Matsuzaka not throw a pitch too. Apparently this is like one of those global zombie disease epidemics and we'll all have to amputate appendages and replace them with automatic weaponry if we wish to survive. The Rockies didn't. Well, Jonathan Herrera probably did as he's spraying more hits than a tommy-gun lately, knocking another three tonight. Clint Barmes had a pair so too Seth Smith, Carlos Gonzalez and Todd Helton. Miguel Olivo was fairly dismal in a one for six showing. Brad Hawpe was heading the same direction until he hit the game tying single in the ninth off of Jonathan Papelbon to give us a little hope. A little hope that was dashed shortly thereafter by Pedroia's third bomb and the zombies in the mirror getting close...

We did win the series.

On to Anaheim, I hear there's a refuge from the walking dead there, and they don't like the Red Sox as much as we don't. 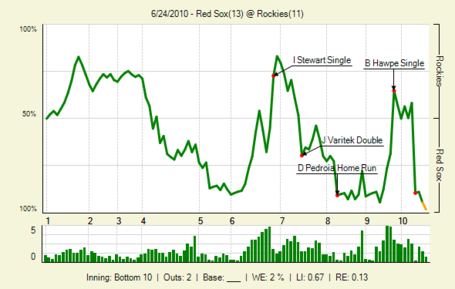