Rockies lose offense at airport, Hawpe to a wall, but finally find a win vs the Angels

Share All sharing options for: Rockies lose offense at airport, Hawpe to a wall, but finally find a win vs the Angels

Chris Iannetta's two run home run was the only offense the Rockies could generate against Jered Weaver on Friday night in Anaheim, but a rally off the Angels bullpen (thanks largely to Jonathan Herrera and Iannetta again) extended the game and eventually won it, four to three for the Rockies. Jeff Francis pitched well, going six and a third innings and giving up three runs, while Jered Weaver rolled through the Rockies lineup racking up 11 strikeouts. Jonathan Herrera and Carlos Gonzalez, who combined for five of Weaver's strikeouts were instrumental in tying the game at three in the eighth inning off of Fernando Rodney. Herrera singled and advanced on a wild pitch and scored on Gonzalez's subsequent single.

The tie lasted until the eleventh inning when Iannetta doubled, and after a pinch hit walk by Melvin Mora, Jonathan Herrera singled in the winning run. Matt Belisle pitched a scoreless ninth and tenth innings to preserve the tie, Randy Flores and Rafael Betancourt also contributed to a scoreless effort from the Rockies bullpen. Manny Corpas, in because Huston Street had pitched two nights in a row, bounced back from a miserable week by registering a high leverage save and closing out the Angels in the eleventh.

Brad Hawpe left the game after bruising his ribs when he ran into a wall chasing a foul ball in the first inning. His injury status for the remainder of the road trip hadn't been updated at the time of this writing.

Memo to Jim Tracy: Melvin Mora is not good at second base. 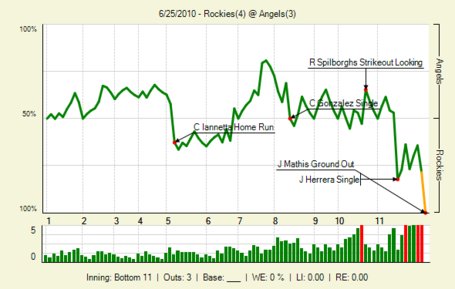