Angels 10, Rockies 3: Colorado Outhits Anaheim, But That's Not What Matters

Share All sharing options for: Angels 10, Rockies 3: Colorado Outhits Anaheim, But That's Not What Matters

As Jorge de la Rosa nears his return, the interesting story has been the two pitchers he could replace in the rotation.  Yesterday, Aaron Cook (who had been statistically the least effective) pitched quite possibly the most dominant 4-run outing in club history.  Jhoulys Chacin followed suit today, with most definitely the Rockies' most dominant "five-run" outing today (his FIP for the outing was 2.87, two full runs below Edwin Jackson's no-hitter....funny this game...).

The Rockies' 22-year-old rookie finished six innings with 12 strikeouts, just two shy of the franchise record.  He completely dominated the Angels the first time through the lineup, striking out his first five outs and six of the first nine batters.  After splitting two strikeouts with a Bobby Abreu triple in the fourth inning, Chacin began "unearning" the game.  Hideki Matsui rapped a two-out single for the Angels' first tally, then Ian Stewart's second fielding error in as many days set up a three-run home run from Mike Napoli.

The Rockies would score on an Ian Stewart solo home run, a Jason Giambi bloop double and Clint Barmes single.  But the three runs would not be enough to overcome the three unearned runs as a result of Stewart's gaffe and the bullpen's implosion in the eighth inning.

The Rockies' Latin duo in the pen continues to struggle.  Franklin Morales allowed a walk and single in the eighth.  Then Manuel Corpas permitted a double, intentional walk and grand slam to Brandon Wood.  Yes really.....Brandon freaking Wood.

The result is a series loss against the Angels and a 3-3 week after beginning 3-1.  Still, in the grand scope of the week, it has to be considered a success.  Facing the Red Sox and Angels is a difficult slate for a short-manned team who is using a 22-year-old for one third of their games.

Carlos Gonzalez singled three times, Jonathan Herrera led off the game with a single to extend his hitting streak to nine games, and Chris Iannetta singled (and came mere feet from a game-tying home run). 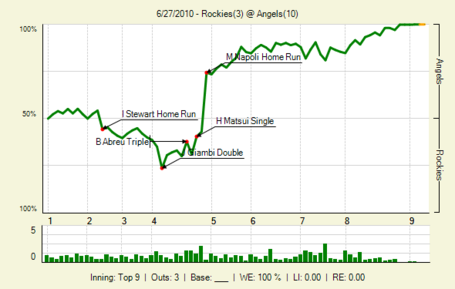 Falling Rock Get Together Roll Call: