Rockies 10, Padres 6: Who needs an ace when you have bats like these?

Share All sharing options for: Rockies 10, Padres 6: Who needs an ace when you have bats like these?

Don't take that headline too seriously. Although, some truth lies in there, as the Rockies powered their way to victory with four home runs and thirteen hits overall, which gave Ubaldo Jimenez his league-leading 14th win. Oh, and I should also mention that the game wasn't played at Coors Field, but was in fact played at Petco Park. At night.

Jimenez (14-1, 1.83) was his dominant self through three innings, and even kept the Padres hitless through five despite having issues with control. Then, in the sixth, Jimenez unraveled a bit as he walked Tony Gwynn Jr. to lead off the inning, which was actually the fourth walked he had allowed up to that point. David Eckstein then got the Friars on the board in the hit column as he singled Gwynn to second. After punching out Adrian Gonzalez for the second time, Chase Headley singled in Tony Gwynn, and Scott Hairston immediately followed with a three-run homer to cut what was an 8-run lead in half. After allowing yet another hit - a single to Will Venable, Jimenez retired the final two batters to keep the lead at four and would not return. His final line: 6 IP, 4 H, 4 R, 4 BB, 7 K.

The bullpen gave us all a bit of a scare in the seventh inning when Joe Beimel allowed a walk, a couple of singles, and balked a runner to second. Matt Belisle relieved him, only to give up a double to that darned Scott Hairston that cut the lead to two. Belisle got out of the inning after intentionally walking Venable and getting Nick Hundley to ground out. Rafael Betancourt (IP, 2 K), Huston Street (IP, H, K), and the Colorado offense made sure the lead would not be in jeopardy again.

The offense was led by Miguel Olivo, who went 3-for-4 with a double, a home run, and four RBI's. He, as well as Carlos Gonzalez and Ryan Spilborghs (who each hit two-run homers), was responsible for the Rox getting out to an 8-0 lead. Seth Smith (solo homer) and Jonathan Herrera (RBI single), who extended his hitting streak to ten games, were the guys who tacked on the insurance runs to keep the Rockies at a safe distance from the Padres. 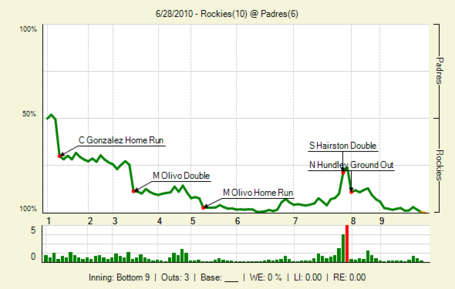 Big ups to controlled_slide for helping out by posting an overflow via FanPost.